The much active user of social media, legendary actor Amitabh Bachchan has now reached the 43 million mark on Twitter.

The 'Sholay' actor shared the good news through a quirky post on Instagram. "This is Insta Mr B, be not the Twitter be. Millions on the T, have no bearing here, as u can C," he captioned alongside a picture of him, having "43 million followers on Twitter" tagline. 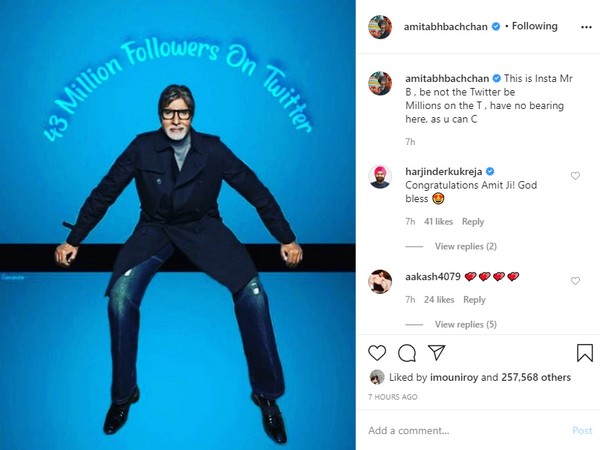 The 77-year-old actor is extremely active on social media platforms, following a major chunk of trends and is an avid blogger. More than pictures, it is his quirky captions that steal the show quite often. He also digs up old photographs and explains the memory attached to it with his followers.

On Tuesday, the actor took to Instagram and shared a very intriguing throwback photo that was taken at Montmartre, Paris. The picture captures moments, and expressions of everybody, while he was getting his portrait made by an artist. 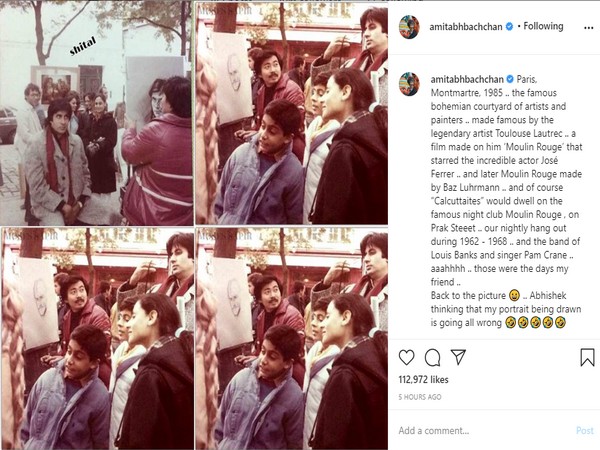 "Paris, Montmartre, 1985.. the famous bohemian courtyard of artists and painters.. made famous by the legendary artist Toulouse Lautrec.. a film made on him 'Moulin Rouge' that starred the incredible actor Jose Ferrer.. and later Moulin Rouge made by Baz Luhrmann.. and of course "Calcuttaites" would dwell on the famous night club Moulin Rouge, on Prak Street.. our nightly hang out during 1962 - 1968.. and the band of Louis Banks and singer Pam Crane.. aaahhhh.. those were the days my friend..," he captioned the post.

However, the main attraction of the picture was the epic expression of a young Abhishek upon seeing his dad's portrait.

"Back to the picture... Abhishek thinking that my portrait being drawn is going all wrong," BigB noted in the captions. Daughter Shweta Bachchan Nanda was also quick to note her younger brother's expression and commented: "Hahahaha look at AB's face."

The 'Gulabo Sitabo' actor has shared 382 posts on the photo-sharing platform and has 19 million followers to date. (ANI)

Big B turns DJ during schedule wrap-up party of 'Goodbye'

Amitabh Bachchan reveals he is a pledged organ donor