The Mayor of London Sadiq Khan, on his website, posted a message calling everyone to join the vigil marking the Westminster attack in which five people, including the attacker, were killed.

London: Londoners trickled into Trafalgar Square for a vigil, a day after a deadly terror attack near the premises of the British Parliament rocked the city.
The Mayor of London Sadiq Khan, on his website, posted a message calling everyone to join the vigil marking the Westminster attack in which five people, including the attacker, were killed.
"The Mayor invites all Londoners - and everyone visiting our city - to come together in solidarity to remember those who have lost their lives, to express sympathy with their families and loved ones and to show the world that we are more committed than ever to the values that we hold dear - that we remain united and open. London is the greatest city in the world. We will never be cowed by terrorism. We stand together, in the face of those who seek to harm us and destroy our way of life. We always have, and we always will," the post read. 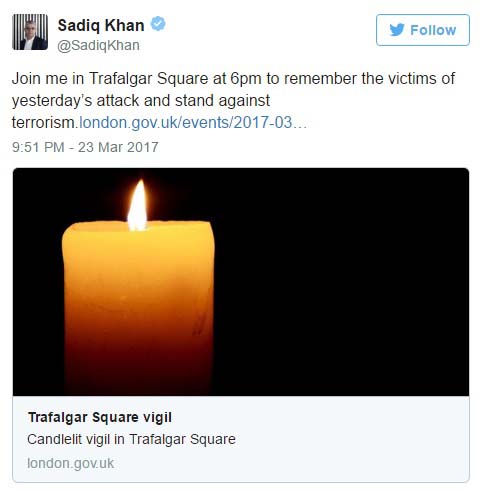 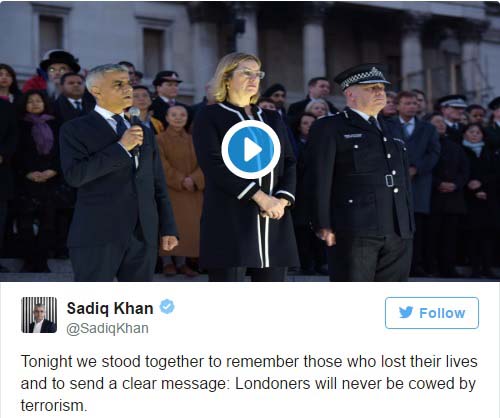 Candles flickered on downturned faces as people paid tribute to those who had been killed and injured, as the words "solidarity" and "unity" could be heard above the conversation.
Home Secretary Amber Rudd and the London Mayor Sadiq Khan addressed the events which brought Westminster and the heart of the capital to a standstill.
After a minute of silence, a mixed crowd of all ages and races wiped their eyes and shuffled forward to light candles as dusk turned to night. "Love for all, hatred for none," read one sign. 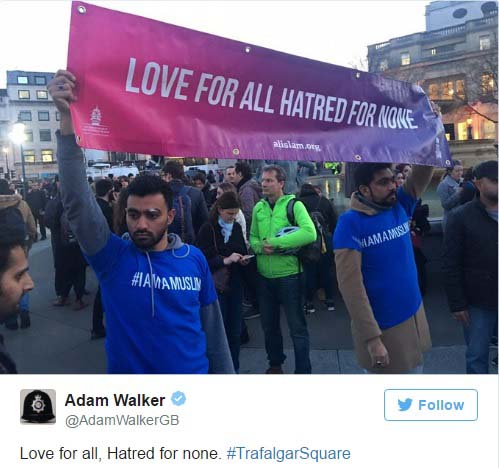 The man believed to have been responsible for the terrorist attack in Westminster was identified as 52-year-old Khalid Masood.
The Metropolitan Police said Masood was born in Kent, but is thought to have been living in the West Midlands recently, adding that Masood was also known by a number of aliases.
"Masood was not the subject of any current investigations and there was no prior intelligence about his intent to mount a terrorist attack," the police said in a statement.
Earlier, the Islamic State claimed responsibility for the Westminster attack that claimed the lives of four and injured 40 others.
British Prime Minister Theresa May said the attacker behind the terrorist rampage at the gates of the Houses of Parliament was a British-born man previously known to MI5 due to concerns over violent extremism.

Also Read: London attack-Police confirms seven arrests
"The assailant, who was shot dead on Wednesday as he attacked police officers in the shadow of Big Ben, was considered to be a peripheral figure and had fallen from the intelligence picture," May told a packed House of Commons.
"Attacker was British born and thought to be inspired by Islamist ideology," May said.
As many as four people died after a terrorist attacked Westminster, stabbing a police officer to death as he tried to storm the Parliament, and killing three members of the public as he careered through the heart of the capital in a 4x4 vehicle. (ANI)