Director Nandita Das has shared the first poster of her upcoming movie 'Manto' on Facebook.

Mumbai: Well! we have seen Nawazzuddin Siddiqui  essaying the role of any damn person! But, now his intensive look will make you more crazy as the first look of 'Manto' was unveiled at 70th Cannes Film Festival. 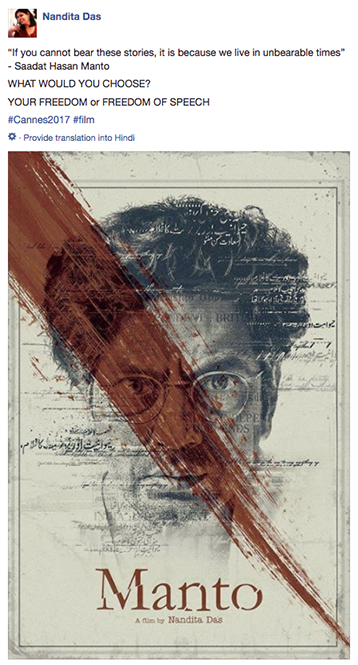 Film Director Nandita Das has share the first poster of her upcoming movie on Facebook and wrote: "If you cannot bear these stories, it is because we live in unbearable times" - Saadat Hasan Manto. WHAT WOULD YOU CHOOSE? YOUR FREEDOM or FREEDOM OF SPEECH#Cannes2017 #film."

In the movie, Nawazzuddin Siddiqui will play as the titular and Rasika Duggal will be seen as Manto's wife.

What is life without a few" HICCUPS"