The Monsoon Session of the Parliament, the Rajya Sabha and Lok Sabha was adjourned for the day after giving obituary to former members and victims of the Amarnath terror attack.

New Delhi: The Rajya Sabha and Lok Sabha was adjourned for the day on Monday after giving obituary to former members and victims of the Amarnath terror attack.

The dastardly Amarnath terror attack was strongly condemned by the Rajya Sabha and Lok Sabha MPs.

The Monsoon Session of the Parliament, which began from today, will continue till August 11.

Also read: Mayawati: Whosoever wins, it will be a win for Dalits 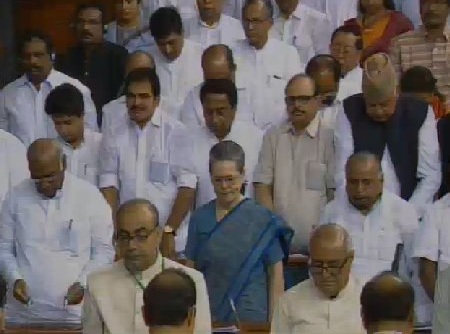 The Opposition is likely to raise the issue of China, Jammu and Kashmir and Darjeeling unrest, impact of Goods and Service Tax (GST) and other issues.

Apart from this the Centre will also introduce 16 new bills in both the houses of the Parliament for consideration and passing.

Ahead of the Monsoon Session, Prime Minister Narendra Modi yesterday, while addressing the floor of leaders of parties of the Rajya Sabha and Lok Sabha at the national capital, said that for preserving the institution of Democracy in India, it is important that all political parties support the Government to conduct business in both Houses of the Parliament without disruption and constructive discussion takes place on issues of national importance.

Prime Minister Modi further urged all parties to extend their support to the Government in fighting corruption and the issue of communal violence in the name of cow protection.

The Prime Minister also called on all the parties to support the war against corruption, which has been initiated by the government.

Meanwhile, the polling for the President election is underway at the Parliament and the various state Assemblies. (ANI)