PM Modi said he was looking forward to deepening bilateral engagement with both the countries in a number of areas including trade, investment and clean energy.


New Delhi: Prime Minister Narendra Modi today left for a five-day visit to Sweden and the UK, where he will attend the Commonwealth Heads of Government Meeting (CHOGM).

Ahead of his visit, Modi said he was looking forward to deepening bilateral engagement with both the countries in a number of areas including trade, investment and clean energy.

In the first leg of his visit, Modi will reach Sweden's capital Stockholm where he will hold extensive talks with Prime Minister Stefan Lofven, besides attending a India-Nordic Summit.

"India and Sweden share warm and friendly ties. Our partnership is based on democratic values and commitment to an open, inclusive and rule-based global order. Sweden is a valuable partner in our development initiatives," Modi had said in a departure statement last night.

The two Prime Ministers will hold bilateral talks on Tuesday.

Modi said he and Lofven would also interact with top business leaders of both the countries and chart out a future roadmap of cooperation in sectors such as trade and investment, science and technology, clean energy and smart cities.

The Prime Minister said he would also call on King of Sweden Carl XVI Gustaf. 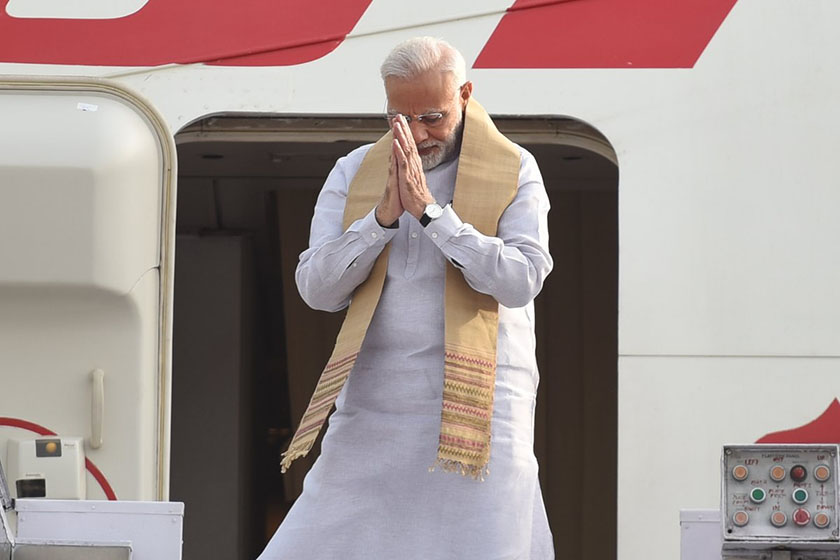 India and Sweden will also jointly organise the India-Nordic Summit in Stockholm tomorrow. The summit is scheduled to be attended by the Prime Ministers of Finland, Norway, Denmark and Iceland.

From Sweden, Modi will later tomorrow travel to the UK where he will also attend the CHOGM, besides holding bilateral talks with his British counterpart Theresa May.

"My visit to London presents another opportunity for both countries to infuse fresh momentum to this growing bilateral engagement. I will be focusing on enhancing India-UK partnership in the areas of healthcare, innovation, digitisation, electric mobility, clean energy, and cyber security," the prime minister said.

"Under the theme of 'Living Bridge', I will also have the opportunity to meet people from various walks of life who have enriched the multi-faceted India-UK relationship," he said.

Modi would also call on the Queen, interact briefly with CEOs of the two nations who are working on a new agenda of economic partnership, launch an Ayurveda Centre of Excellence in London, and welcome the UK into the International Solar Alliance, as its newest member.

Also Read: PM Modi- India will be key driver of global energy demands in next 25 years

On April 19 and 20, Modi will participate in the Commonwealth Heads of Government Meeting being hosted by the UK which will take over as the new Chair-in-Office of the Commonwealth from Malta.

"The Commonwealth is a unique multilateral grouping that not only provides useful assistance to its developing country members, particularly the small states and small-island developing states, but also has a strong international voice for development issues," Modi had said.

The External Affairs Ministry had on Saturday said Modi would also meet German Chancellor Angela Merkel during a brief stopover in Berlin on April 20 after concluding his visits to Sweden and the United Kingdom. (PTI)