The focus of this year's Padma awards, according to the officials in the Home Ministry, was on recognising talent of unknown and unsung heroes of the country.

The focus of this year's Padma awards, according to the officials in the Home Ministry, was on recognising talent of unknown and unsung heroes of the country.

Among 44 persons who were awarded with Padma Vibhushan, Padma Bhushan and Padma Shri, 40 were present to receive the honour while in three cases, where awards were given posthumously, relatives received it. One recipient of Padma Shri was also not present in the ceremony. 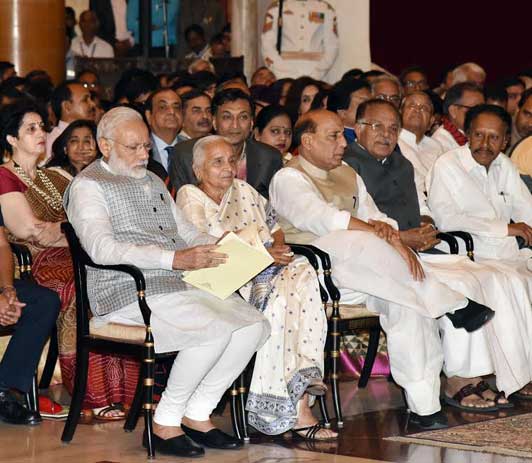 Journalist Cho S Ramaswamy was also honoured with Padma Bhushan posthumously and his wife received it.

Kher said that he was honoured to receive the award.

"India has a great tradition of music and intellect. It attracted attackers from abroad because of its wealth and intellect," he said.

Karmakar, who was limping because of a knee injury, attracted the attention of Prime Minister who was sitting in front row and queried about her well being.

"It is a knee injury. I have to take rest for five six months, then I will train for Commonwealth Games," Karmakar said after the ceremony.

The 23-year-old "Produnova Princess" from Tripura had finished fourth in artistic gymnastics at Rio Olympics last year which is the best by Indian in the competition dominated by Western countries and China.

Malik is the first woman wrestler from the country to win an Olympic Bronze medal in the women's 58 kg wrestling.

Among unsung heroes, school dropout Jitendra Haripal, popular as 'Rangabati ki Awaz' who is known for Odhisa's most popular recorded song "Rangabati" and being a top exponent of Kosli-Sambalpuri music was also conferred Padma Shri.

Ela Ahmad, 81, from Assam who has been running the only women magazine in the northeast since 1970, and volunteer fire fighter Bipin Ganatra from West Bengal were also decorated with the honour.

Ganatra is the only person apart from fire brigade officials who has been to almost every fire accident site in Kolkata in the last 40 years.

"I started it when I was 10 years of age. I used to go to site of fire accident and help the Fire Department in whatever way I could. After losing my brother in a fire accident, I started actively helping fire department," Ganatra said.

His invention impacted 60 per cent of looms engaged in weaving Pochampalli.

'Highway Messiah' Dr Subroto Das from Gujarat known for bringing medical relief to accident victims on national highways was also among the recipients of Padma Shri.

Among other unsung awardees were Anuradha Koirala, a 67- year-old Nepalese woman, who has been instrumental in rescuing and rehabilitating 12,000 sex trafficking victims; Gujarat's Genabhai Dargabhai Patel aka 'Anar Dada' who is a 'divyang' farmer and has taken huge efforts to make his drought-hit village in Banaskantha district become the largest producer of pomegranate in the country.

Kannada lexicographer G Venkatasubbiah, who was awarded Padma Shri, was not present in the ceremony. (PTI)

Farewell Pranab Mukherjee: Outgoing President thanks Parl. for 'creating' him