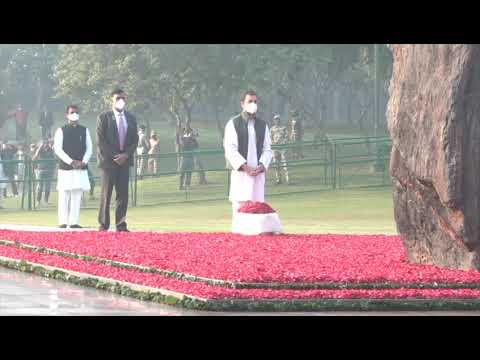 New Delhi [India]: Congress leader Rahul Gandhi on Thursday paid floral tribute to former Prime Minister and his grandmother Indira Gandhi here at Shakti Sthala, on her 103rd birth anniversary.
Shakti Sthala is the memorial of Indira Gandhi in the national capital.
Taking to Twitter, Rahul posted a picture of his grandmother and remembered her as an "efficient Prime Minister" and as someone who was "Shakti Swaroop" (form of power).
"I pay my tribute on the birth anniversary of Smt. Indira Gandhi, an efficient Prime Minister and form of power. While the entire nation, even today, speaks of her impressive leadership, I always remember her as my beloved grandmother. Things she taught me inspire me every day," he tweeted (roughly translated from Hindi).
Meanwhile, the official handle of the Congress recalled her as a "trail blazer, visionary, true leader and great daughter of India."
"A trailblazer, a visionary, a true leader and a great daughter of our motherland, Indira Gandhi was much more than a Prime Minister to our citizens; she was the revitalising strength in their quest for greatness and prosperity. Today, we pay a proud tribute to India's Indira," the party tweeted.
Born on November 19, 1917, to India's first Prime Minister Pandit Jawaharlal Nehru and Kamala Nehru, Indira Gandhi served as the first and only woman prime minister of the country from January 1966 to March 1977 and again from January 1980 until her assassination in October 1984. (ANI)