A poll surveillance team has seized Rs 19 lakh cash from a car in Thane city of Maharashtra.

Thane: A poll surveillance team has seized Rs 19 lakh cash from a car in Thane city of Maharashtra, the election office here said.

Also Read: Police seize Rs one crore in cash from a BMW car

The team intercepted the car, belonging to an architect, Durgesh Nadkarni, in Kolshet area here on Wednesday and found the cash in it, it said in a release. 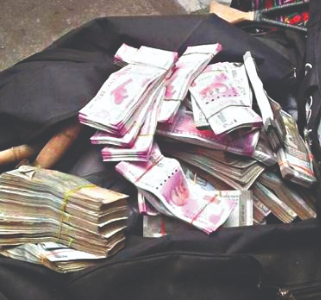 Nadkarni claimed he was carrying the cash to some construction sites in Navi Mumbai area for payment to workers, the release said.

Also Read: Around Rs 10 cr seized from 3 cars in Punjab

The Income Tax department has been informed about the seizure and its officials will take further action in the matter, it added.

Polling in Thane Lok Sabha constituency will be held on April 29. (PTI)

One held with ganja worth Rs 6 lakh in Maharashtra