Bollywood: Film star Alia Bhatt shows gratitude to the audience for their love for 'Brahmastra' trailer

Alia is currently busy shooting for her Hollywood debut 'Heart of Stone'.

Taking to Instagram Stories, Alia wrote, "Another GREAT day on Heart of Stone - so so so tired - but so so so happy with all the love for our d Brahmastra... makes all the aches and pains go away.. love you alll." 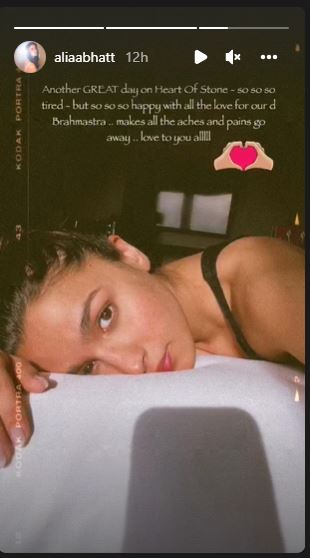 Alongside the note, she dropped a picture, in which she is seen lying on her bed, while posing for a selfie.

The 2-minute 52-second-long trailer begins with Ranbir running forward and colliding with something that looks like a bus. Amitabh Bachchan is heard introducing Ranbir as a boy who is unaware that he has superpowers.

The trailer gives us a glimpse of how a parallel universe exists in the modern age, with many visuals depicting a magical world of romance along with a lot of action sequences.

Bollywood: Ranbir-Alia starrer 'Brahmastra' trailer to be unveiled on 15 June

'Made in China' trailer: Rajkummar brings 'soup-er hit jugaad of the year'

Thugs of Hindostan trailer: Perfect combo of action and adventure