China has released a map to back its claim that Indian troops "transgressed" into the Doklam area of the Sikkim sector, which it claims as part of its territory.

Beijing: China has released a map to back its claim that Indian troops "transgressed" into the Doklam area of the Sikkim sector, which it claims as part of its territory.

In the map, released by the Chinese Foreign Ministry, a blue arrow with markings in Chinese points Indian troops alleged transgression into the area to prevent the PLA troops from building a strategic road.

The map shows Doklam as part of Chinese territory. Bhutan has protested to China asserting that the area is part of its territory and Chinese action is vocative of 1988 and 1998 agreements. 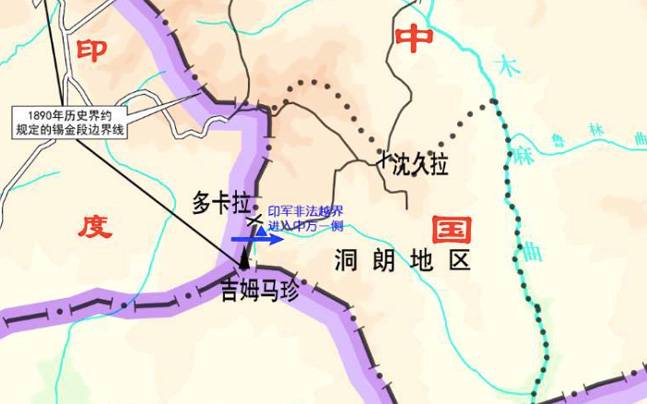 The map is in addition to two photographs released on Thursday purportedly showing Indian troops on the Chinese side of the border.

Chinese Foreign Ministry spokesman Lu Kang displayed the photographs of the alleged Indian "incursion" into the area during a media briefing.

Later, the ministry uploaded them on its website. One photo showed two bulldozers stated to be that of the Indian military while another showed one bulldozer. A redline in the photos was showed as "Chinese side of the border".

A standoff erupted between the two militaries after the Indian Army blocked construction of the road by China in the Doklam area. Of the 3,488-km-long India-China border from Jammu and Kashmir to Arunachal Pradesh, a 220-km section falls in Sikkim.

China alleged that the Indian troops "trespassed" the recognised delineated boundary between China and India on June 18.

India on Friday expressed deep concern over China constructing the road in the disputed area and said it had conveyed to Beijing that such an action would represent a significant change of status quo with "serious" security implications for India.

India's reaction follows a face-off between Indian and Chinese troops in the area, prompting Beijing to take a tough stance and demand withdrawal of Indian troops from the Sikkim sector as a precondition for "meaningful dialogue" to resolve the situation.

The stand-off between the Indian and Chinese troops led to the cancellation of the Kailash Mansarovar yatra through Nathu La in Sikkim.

India, China agree on process of 'disengagement' in Doklam

UK calls on China, India to engage in dialogue to resolve 'worrying' standoff

We've reached consensus with India breaking circle of ups and down in ties, says Chinese Envoy