Reigning junior world champion Deepak Punia on Saturday became the fourth Indian to qualify for the Tokyo Olympics after moving to the 86kg semifinals at the World Wrestling Championship on Saturday.

Nur-Sultan: Reigning junior world champion Deepak Punia on Saturday became the fourth Indian to qualify for the Tokyo Olympics after moving to the 86kg semifinals at the World Wrestling Championship here on Saturday.

Competing in his maiden senior World Championship, Deepak locked the quota after prevailing 7-6 in a tense semifinal against Colombia's Carlos Arturo Mendez.

With one minute to go, he was trailing 3-6 but pulled off a takedown and then expose move to take a 7-6 lead in the dying moments of the tense bout.

He will now clash with Switzerland's Stefan Reichmuth for a place in the gold medal match.

Also doing a commendable job was Rahul Aware, who has moved to the semifinals in the 61kg non-Olympic category.

Vinesh Phogat, Deepak Punia and Ravi Dahiya have already qualified for the 2020 Olympics with bronze medals.

However, Jitender (79kg) lost his quarterfinal while Mausam Khatri lost his first round in 97kg to reigning Olympic champion Kyle Frederick Snyder. 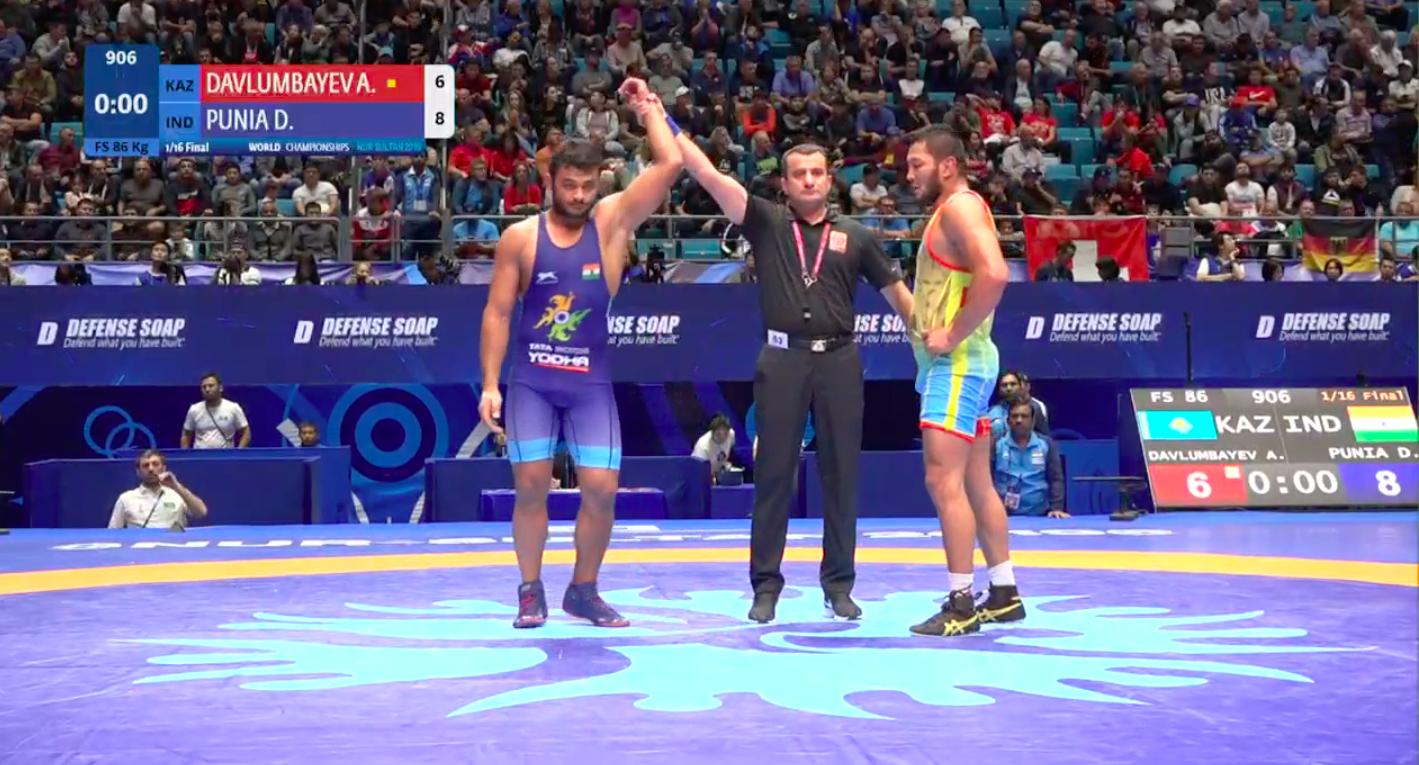 Deepak had bumped into home wrestler Adilet Davlumbayev in his opening round and looked a bit nervous before the bout, probably fearing partiality.

However, he played very smartly to defeat the home favourite despite trailing 0-5.

Adlilet was playing rough and was cautioned for poking Deepak. Consecutive takedown moves and a caution point brought Deepak on even terms at 5-5.

He converted an opportunity but also conceded a throw and it was 7-7. The home camp challenged the call and lost.

Deepak got one more point while the Kazakh lost one, sending Deepak into the next round.

He was hardly troubled by Tajikistan's Bakhodur Kodirov, who he beat 6-0 to move to quarterfinals.

The diminutive agile wrestler from Maharashtra was in complete control of the bout, which he ended with leg lace moves, winning by technical superiority.

Against Kazakhstan's Rassul Kaliyev, it was a very tough bout but the Indian showed more craft than his rough opponent and won 10-7 in a roller-coaster quarterfinal. He was technically more sound and sharp.

In the pre-quarterfinals, he was up against Turkey's Muhammet Nuri Kotanoglu, the European Championship bronze medallist and again his immense upper body strength helped him to a 7-2 win.

However, he could not find a way to break the solid defence of Slovakia's Taimuraz Salkazanov, losing 0-4.

In 97kg, Mausam Khatri was no match to the American, losing by technical superiority. (PTI)