All-rounder Irfan Pathan, who still remains one of the most popular cricketers in the country, took to social micro-blogging site Twitter to share a very emotional message with his fans and followers.

New Delhi: After being missed out on earning a contract from Indian Premier League (IPL) franchises in the auction ahead of its 10th season, veteran all-rounder Irfan Pathan penned an emotional letter to his fans and followers.

Pathan, who had a base price of Rs 50 lakh, would have expected a few franchises to pay attention to his all-round skills but the bidding war saw the IPL teams opting for few uncapped players instead.

Taking to micro-blogging website Twitter to express his disappointment over the snub, the 32-year-old cricketer from Baroda explained how despite being suffering five fractures on his back, he didn't give up his dream of playing cricket again. 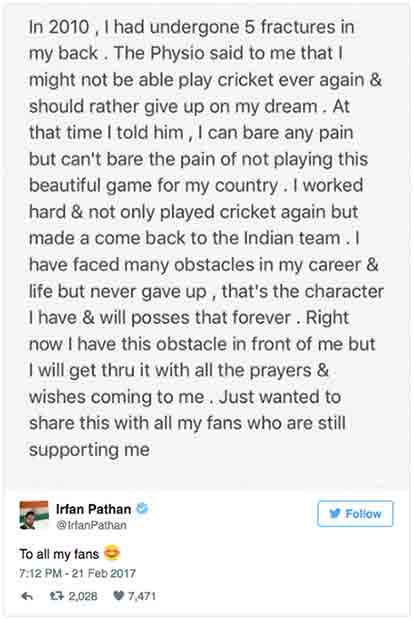 "In 2010, I had undergone 5 fractures in my back. The physio Therapist had told to me that I might now be able to play cricket ever again and should rather give up on my dream. At that point of time I told him, I can bear any pain but cannot the bear the pain of not playing this beautiful game for my country," he tweeted.

Pathan further insisted that just like he made a return to the national team through hard work and fighting spirit, in the same manner he would get through this current obstacle of his life.

"I worked hard and not only played cricket again but made a comeback to the India team. I have faced many obstacles in my career and life but never gave up, that's the character I have and will possess that forever. Right now I have this obstacle in front of me but I will get through it with all the prayers and wishes coming to me. Just wanted to share this with all my fans who are still supporting me," he said.

In the previous edition of the IPL, Pathan was a part of the Rising Pune Supergiants. However, he failed to make it to the Playing XI in most matches.

Pathan, who appeared in 29 Tests, 120 ODIs and T20Is for India, recently, raised eyebrows with his impressive performances in the Syed Mushtaq Ali T20 tournament where he bagged five wickets in four games he played.