Mahalaxmi Exp stuck in Thane with 700 passengers after heavy rains, NDRF called in

There was no respite from incessant rains in Mumbai which affected the rail services on Saturday, with long-distance Mahalaxmi Express getting stuck near Badlapur in Thane district due to flooding of tracks.


Mumbai: There was no respite from incessant rains in Mumbai which affected the rail services on Saturday, with long-distance Mahalaxmi Express getting stuck near Badlapur in Thane district due to flooding of tracks.

Authorities called in the National Disaster Response Force and also sought help from the navy to rescue the 700 stranded passengers of the train, which left Mumbai for Kolhapur on Friday night but could not travel beyond Chamtoli where it is stranded since the early hours of Saturday, an official said.

Brijesh Singh, Directorate General of Information and Public Relations (DGIPR), Maharashtra: Three boats for rescue have reached the spot where Mahalaxmi Express is held up between Badlapur and Wangani with around 2000 passengers. https://t.co/pdnk9SJJHw

"Due to a raging Ulhas river, the Mahalaxmi Express train got stuck at Chamtoli within the limits of Badlapur due to flooded tracks. The passengers were safe, but the only concern was a rise in water level on the tracks," Resident Deputy Collector (Thane) Shivaji Patil said.

He said two National Disaster Response Force (NDRF) teams have been rushed to the site to rescue the stranded passengers. "Helicopter services and naval assistance have also been sought," he added.

NDRF personnel are rescuing the passengers, a senior official said.

The Central Railway (CR) appealed to the passengers not to try getting out of the train on their own as it can be risky. 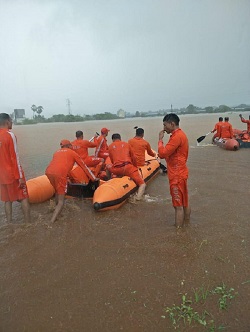 "Our request to passengers of Mahalaxmi Express, please don't get down from train. Train is a safe place. Staff, RPF and City Police are in train to look after your wellbeing. Please wait for advice from the NDRF and other disaster management authorities," said Sunil Udasi, the chief spokesperson of the Central Railway.

Defence Public Relations Officer on #MahalaxmiExpress rescue: Due to bad weather, helicopters of Navy & Air Force have returned to base after doing aerial survey. One inflatable boat disembarked by Navy choppers to assist in rescue operations. #Maharashtra pic.twitter.com/asKPJ1sit3

"We have planned a special relief train to send the passengers to their destination. Food packets have been delivered to the passengers by the local police and the Railway Protection Force (RPF)," he added. (PTI)