Prime Minister Narendra Modi on Friday reached Chennai to hold the second informal summit with Chinese President Xi Jinping, who is expected to arrive in the city later in the afternoon today.

Chennai: Prime Minister Narendra Modi on Friday reached Chennai to hold the second informal summit with Chinese President Xi Jinping, who is expected to arrive in the city later in the afternoon today.

He was received at the airport by Governor Banwarilal Purohit and Chief Minister Edappadi K Palaniswami, along with other officials. The first such meeting was held between the two leaders in Wuhan from April 27 to 28 last year. The talks were held in a relaxed and candid environment and showed the camaraderie shared between the leaders of two Asian giants.

Also Read: Security heightened in Mamallapuram ahead of Xi-Modi summit

This year, the unique meeting will be held in the historical coastal city of Mahabalipuram, which is famous for the temples and architecture made during the Pallava Dynasty. The Wuhan summit played a major role in normalising India-China ties after the 72-day long standoff between troops of the two countries at Doklam Plateau in 2017.

The incident was triggered by the Chinese side trying to undertake construction work in the trijunction area India, China, and Bhutan border. After several rounds of negotiations, India and China decided to mutually disengage. Since the first informal summit, Xi and Modi have met on five occasions at least, including the SCO Summits in Qingdao and Bishkek, the G-20 Summits in Buenos Aires and Osaka, and the BRICS meeting in Johannesburg.

The Mahabalipuram Informal Summit will provide an opportunity to the Chinese President and PM Modi to continue their discussions on overarching issues of bilateral, regional and global importance and to exchange views on deepening India-China Closer Development Partnership, the Ministry of External Affairs said in a statement. This summit will mostly be similar to the one in Wuhan. Xi is expected to arrive at the Chennai International Airport on Friday afternoon. The two leaders will meet in Mahabalipuram in the evening and visit UNESCO world heritage sites. 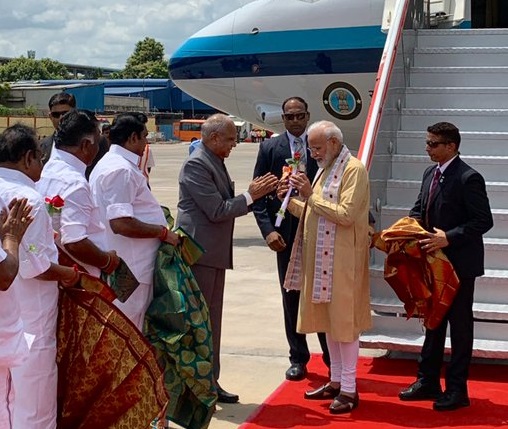 They will have guided tours of three monuments - Arjuna's penance, an intricately carved ancient sculpture; Krishna's Butter Ball - a big round boulder perched on a slope; and Pancha Rathas - a five chariots monument complex. Apart from being a major tourist attraction, Mahabalipuram also has a China connection, having had ancient maritime links with the country during the Pallava dynasty. It was a major port city in the 7th century and served as a gateway for import and export of goods from and to South India.

A cultural programme will be organised in honour of the visiting leader at the Shore Temple on Friday evening. Modi will then host the Chinese President for dinner. On Saturday, Modi and Xi will have one-to-one meeting followed by delegation-level talks. No Memorandum of Understandings (MoUs) or agreements would be signed. No joint communique would be issued either. (ANI)

Security heightened in Mamallapuram ahead of Xi-Modi summit