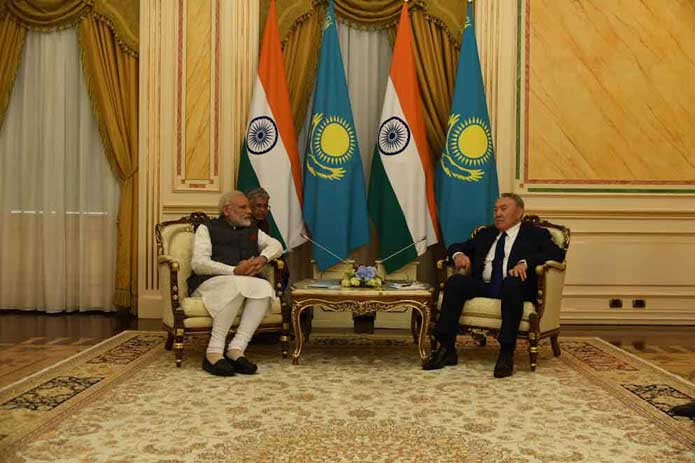 India is set to become a full member of the SCO during the two-day summit.

Briefing media in Delhi last evening, Ministry of External Affairs (MEA) spokesperson Gopal Baglay said, "India will be benefited in trade and economic activity after it becomes a full member. He said that trade, connectivity, energy, banking and fight against terrorism are the main areas of cooperation."

Joint Secretary, Eurasia, G. V. Srinivas said, "India is joining SCO with an open mind for peace and stability in the region. Strengthening mutual trust and neighbourliness, promoting cooperation in politics, trade, economy, research, technology and culture and other areas are the main goals of SCO."

India and Pakistan signed the memorandum of obligations on 24 June 2016 at Tashkent, thereby starting the formal process of joining the SCO as full members.

Srinivasan said at the briefing that India has signed a memorandum which is essentially a process through which an aspirant country has to go through before becoming a member of the group.

"So that process has been completed from our side - essentially entailing to a couple of agreements as per the calendar drawn by the memorandum of obligations - something which we have relayed to the Shanghai Cooperation Organisation secretariat in Beijing. They have also confirmed that India has completed this process," he said.

"The indications are that the last leg of the entire membership process that is the confirmation by the heads of state of existing members of the SCO, is going to happen in Astana," he added.

Kazakhstan is India's largest trading partner in Central Asia and the total trade volume between the two countries rose from 120 million US dollars to around 900 million dollars in recent years. India's imports to Kazakhstan include pharmaceuticals, tea, tobacco, telephone equipment and construction machinery.

Its imports from Kazakhstan comprise oil, uranium, titanium, steel, copper among other things.(ANI)

PM Narendra Modi: India with Israel and India for Israel