The third installment of the 'Yamla Pagla Deewana' franchise looks like a fun ride from its recently released posters.

New Delhi: The third installment of the 'Yamla Pagla Deewana' franchise looks like a fun ride from its recently released posters. 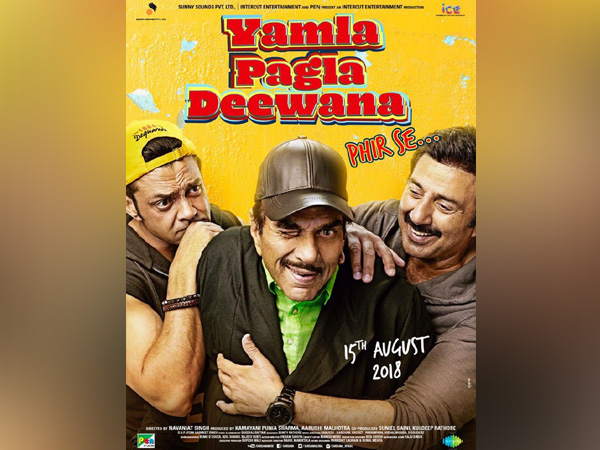 The quirky posters showed Deols sporting funny expressions, be it of mischief, of worry, or of frustration. The first film of the franchise was released in 2011 and the second part, 'Yamla Pagla Deewana 2', came out in 2013.

The most recent poster showed the trio huddled up together looking like in the middle of pulling a prank.

The film revolves around the trio of father and his two sons. While the father (essayed by Dharmendra) and one of his sons (Bobby) are conmen, the other son (Sunny) plays a righteous and strong man.

Helmed by Navaniat Singh, the film is scheduled to hit the theaters in Independence Day weekend, on August 15. (ANI)