Samajwadi Party president Akhilesh Yadav on Friday dissolved the party's entire Uttar Pradesh units including the state executive, and district and youth wings, sources said, as he attempts a course correction in the party after its Lok Sabha poll debacle.

Lucknow: Samajwadi Party president Akhilesh Yadav on Friday dissolved the party's entire Uttar Pradesh units including the state executive, and district and youth wings, sources said, as he attempts a course correction in the party after its Lok Sabha poll debacle.

The party, however, has retained state president Naresh Uttam, they said.

"Party president Akhilesh Yadav has dissolved the state executive. All district executives and the executives of youth and other wings have also been dissolved," a senior party leader said. "A new executives will be formed soon."

The surprise development is being seen as an effort by the SP to recover its electoral base after its poor performance in the recent Lok Sabha polls when it won just five seats -- the same as in 2014 -- despite stitching a pre-poll alliance with the BSP and the RLD.

Much to the SP's chagrin, while its tally remained stuck at five, the tie-up benefitted Mayawati's BSP, which bagged 10 seats in the state -- it drew a blank in 2014 general polls. 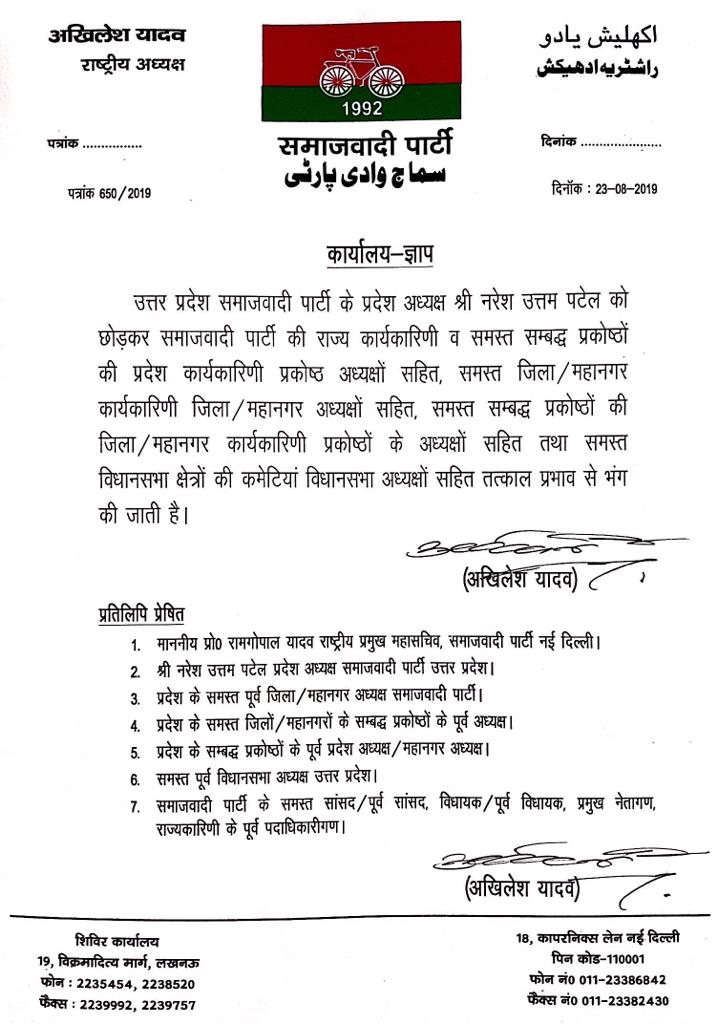 What rubbed salt to the SP's wound was the shock defeat of Dimple Yadav, Akhilesh's wife who had entered the fray as a sitting MP. She represented the Kannauj Lok Sabha seat.

Just a day after the Lok Sabha results were declared, the party chief sacked the panel of leaders appointed as spokespersons for TV channels. The appointment of all party panellists was cancelled in one stroke by the party chief who also said that no TV channel should invite any of them for debate. A party insider said Akhilesh began churning within the organisation the very day the results were out, with over a dozen Assembly by-polls not far away, and the bigger target of 2022 Assembly elections in mind.

"After the LS polls, party president Akhilesh Yadav has been meeting people and taking feedbacks from party workers and office-bearers. After going through all the aspects, the party executives will be reorganised with new 'josh' (enthusiasm) to take on the BJP," party chief spokesman Rajendra Chowdhury said.

The Lok Sabha election debacle for the Samajawadi Party is the second instance when Akhilesh Yadav has miscalculated his move.

He had tried his hand at coalition-building in Uttar Pradesh in the 2017 assembly elections as well, teaming up with Congress. His father and party's founding leader Mulayam Singh Yadav had advised him against the move. He was ignored. 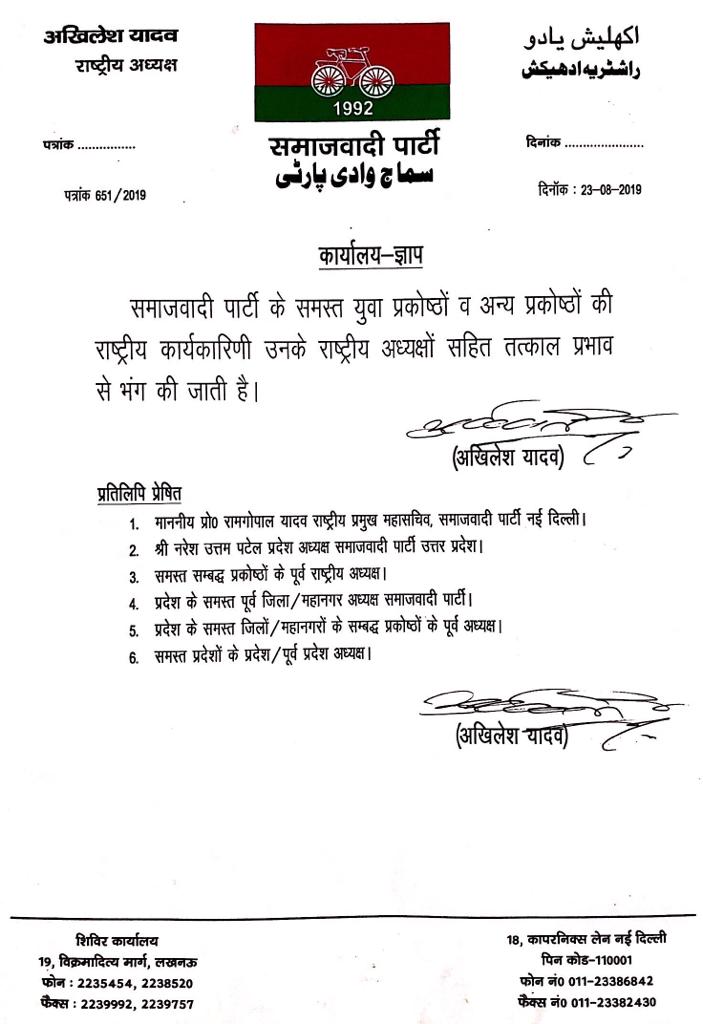 In 2019 Lok Sabha polls too, Mulayam had advised him against forming the BSP alliance for the Lok Sabha. The veteran leader's advice was not heeded to again.

In 2017, Akhilesh had harped upon development agenda during his stint to attract voters. His 'kaam bolta hai' (work speaks for itself) campaign failed to resonate among UP voters.  In 2019, he decided to go back to the tried and tested caste-based calculations to win seats. He failed again.

Having suffered back-to-back electoral defeats, Akhilesh now faces a daunting task of not only regaining the people's confidence in the party but also assuring them of its own identity in state and national politics, some party leaders said.

In 2012, after a stint as the head of the SP's youth wing and UP unit president, he was picked up by his father to become the state's youngest ever chief minister at 38.

In the early years of his term as SP unit chief and the CM, he struggled with his father's legacy -- tackling politicians like D P Yadav, Amar Singh and Azam Khan. His uncle Shivpal Yadav brought in mafia don Mukhtar Ansari's Quami Ekta Dal into the SP, against his will.

Another uncle, Ram Gopal Yadav, backed Akhilesh as he tackled dissension in the party and the Yadav clan. Just ahead of the 2017 assembly polls, Akhilesh staged a "coup" of sorts when at an emergency convention of the party in January that year, Mulayam Singh Yadav was ousted as national president and relegated as its 'patron'.

Later, the BJP was to call him Aurangzeb, recalling what one Mughal emperor did to his own father. After the "coup", the two SP factions went to the Election Commission, which ruled in Akhilesh's favour, allowing his group to retain the 'bicycle' poll symbol. (PTI)

BJP calling its UP MPs to Delhi to know about state's plight, misery: Akhilesh Yadav