On the occasion of Sara Ali Khan's birthday, Varun Dhawan treated their fans with the first look posters from the upcoming film 'Coolie No. 1' remake and we can't get over the duo's crackling chemistry!

New Delhi: On the occasion of Sara Ali Khan's birthday, Varun Dhawan treated their fans with the first look posters from the upcoming film 'Coolie No. 1' remake and we can't get over the duo's crackling chemistry!

The recently released posters, which give a glimpse of the fun ride that the film promises to be, will definitely leave you wanting for more. While one poster only features Varun in the attire of a coolie, the other poster also has his leading lady Sara. The two will be sharing screen space for the first time. 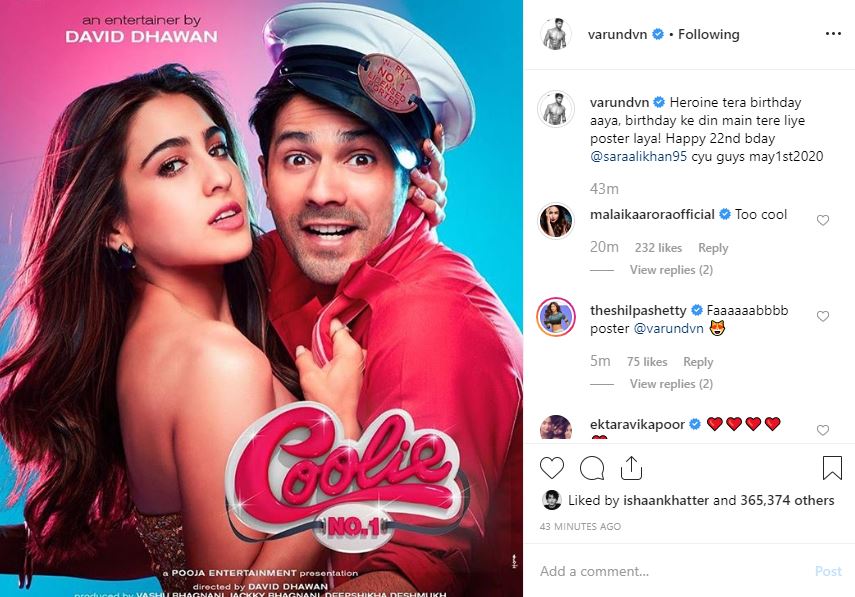 In the poster, Varun is dressed in a traditional railway porter's costume and also sports the iconic Coolie No 1 badge on his forearm. While Sara looks ultra-glamorous, rocking a body-hugging, shimmery one piece. The subtle makeup and perfectly done brows add just the right amount of oomph to her look. She is seen clinging onto Varun in the poster.

Going by the poster, the 'Kedarnath' actor looks like a modern high-society girl.

In the second poster, Varun is dressed in the iconic Coolie avatar -- the red and white uniform -- sitting on a baggage trolley. The attire mixed with Varun's goofy expressions is a perfect union.

"Ek number #COOLIENO1. David Dhawan's 45th film and my first film with Vashu sir who I have known since Iv been a small kid. Thank u to my fans for always supporting me and the haters for encouraging me. Aap sabko Eid Mubarak," he captioned the post.

Prior to this, a motion poster of the movie was released yesterday. Featuring Varun, it showcased an upgraded version of a porter as he carries a number of Louis Vuitton luggage bags and suitcases. The cast began filming in Bangkok, Thailand on 7 August. Writer Farhad Samji had shared the news in an Instagram post. 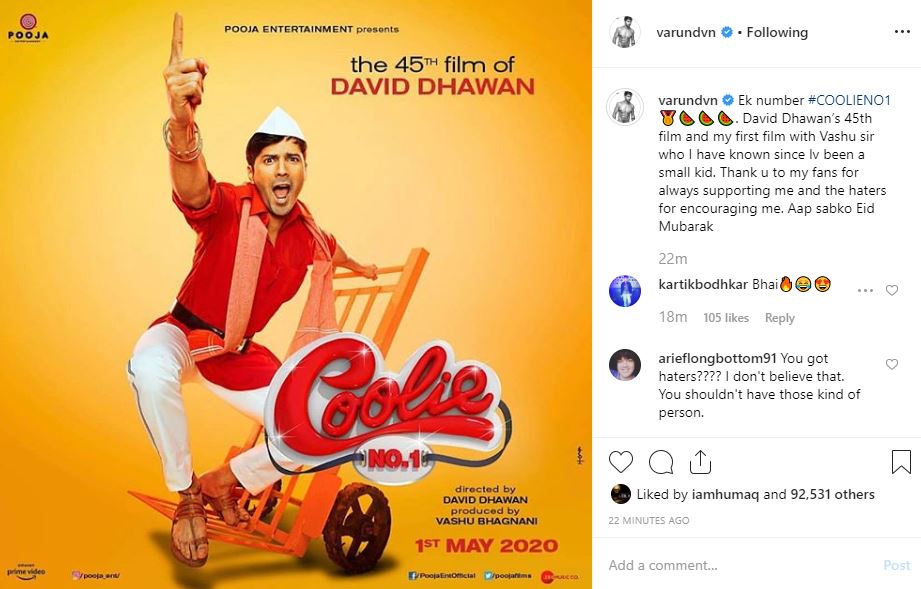 The original film which starred Govinda and Karisma Kapoor in the lead was directed by Varun's father and filmmaker David Dhawan. David will also direct the upcoming film, which will be produced by Vashu Bhagnani, who also bankrolled the 1995 classic.

This will be the second collaboration between David and Varun after the 2017 hit film 'Judwaa 2'. Varun is teaming up with Sara Ali Khan for the first time in the 'Coolie No.1' remake. The film will hit the screens on May 1, next year. Varun will also be seen in Remo D'Souza's upcoming dance film 'Street Dancer'. The movie features Shraddha Kapoor as the female lead and Nora Fatehi and Aparshakti Khurana in pivotal roles. 'Street Dancer' will release in January 2020.

On the other hand, Sara will be starring in Imtiaz Ali's next alongside Kartik Aaryan. It is scheduled to hit the big screens on Valentine's Day next year. (ANI)