A light spell of rain and gusty winds was witnessed in the early hours of Monday in view of the Cyclone Tauktae in Mumbai.

Mumbai: A light spell of rain and gusty winds was witnessed in the early hours of Monday in view of the Cyclone Tauktae in Mumbai.

Meanwhile, the Indian Meteorological Department (IMD) has forecasted that moderate to intense spells of rain with gusty winds reaching 75-85 kmph is likely to occur at isolated places in the districts of Mumbai, Thane, Raigad, Palghar and Ratnagiri during the next three hours.

It predicted a maximum of 36 degrees and a minimum of 27-degree temperature for the day with a generally cloudy sky with moderate rain accompanied by gusty winds in the city with a possibility of heavy falls at isolated places.

The Indian Coast Guard has informed that 4526 fishing boats of Maharashtra and 2258 boats of Gujarat which were out at sea have safely returned to the harbour, in view of Cyclone Tauktae. 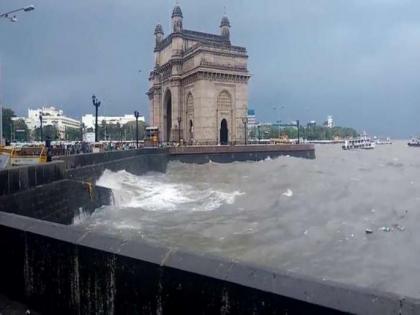 All the ashore, afloat and aviation units were put on high alert and by the time 'Tauktae' as the storm was to be called, eventually formed in Lakshadweep seas, ICG Ships and aircraft had already alerted fishing boats as well as merchant vessels in the possible route of the storm.

The pre-emptive measures by ICG continue with full steam with a focus on the states of Maharashtra and Gujarat as the Very Severe Cyclonic Storm 'Tauktae' travels northwards and is predicted to make landfall at Gujarat coast on the morning of 18th May. State fisheries authorities have confirmed that all the boats have either returned harbour or taken shelter in nearby ports.

The Indian Meteorological Department on Monday informed that the cyclone is nearing towards south-southeast of Diu.

Union Home Minister Amit Shah on Sunday chaired a review meeting with the Chief Ministers of Gujarat, Maharashtra and Administrator of Daman and Diu and Dadra Nagar Haveli to assess the preparedness of States and Central ministries to deal with the situation arising out of Cyclone Tauktae.

The Indian Air Force (IAF) has kept 16 transport aircraft and 18 helicopters operation ready in peninsular India as a preparation for the Cyclone Tauktae.

National Disaster Response Force (NDRF) officials have also assured on Friday that they are well prepared for Cyclone Tauktae and 53 teams have been committed, 24 teams pre-deployed, and 29 teams are on standby ready for the 5 most vulnerable states-- Kerala, Tamil Nadu, Karnataka, Gujarat and Maharashtra. (ANI)