"JioPhone will be available to all Indians for an effective price of Rs 0. JioPhone is effectively free for Jio customers," Ambani said, while launching the phone at the companies 40th Annual General Meeting (AGM) here.

Ambani added that to protect the misuse of the free phone, the company will collect a fully refundable one time security deposit of Rs. 1,500 for every JioPhone.

"A JioPhone user can use the Jiophone for 36 months and can get a full refund of the security deposit of Rs. 1500 by returning the used Jiophone," he said, while claiming that JioPhone is the most affordable intelligent phone in the world.

Ambani dedicated the newly launched cellular phone to the 70th anniversary of India's Independence, with a motive to provide data to over 50 crore data-deprived people in India, so that it no longer remains the "privilege of few." 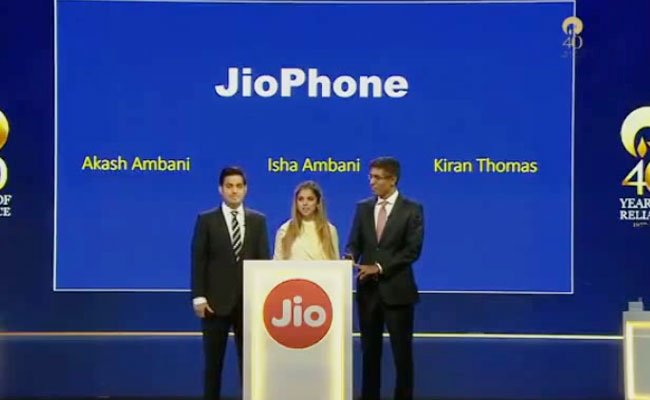 "The JioPhone will be available for user testing on August 15 and the pre-booking starts on August 24. It will be physically available to those who have pre-booked the phone on first-come-first-serve basis from September this year," Ambani said.

Jio will provide access to unlimited data on JioPhone at Rs. 153 a month, which if used on other network, with similar phone feature would cost Rs. 3,000-Rs. 4,000, claimed the CMD.

"All Jio users can enjoy content from phone screen to TV screens, which will be available with a Rs. 309 plan," Ambani said.

The company plans to make 5 million phones available every week, which will be made in India.

Ambani said that though initially nobody believed in the success of the Jio, the mobile network, within ten months of its launch, in September 2016, broke a number of world records.

"In less than 170 days, more than 100 million customers signed up for Jio services on an average and Jio added seven customers per second every single day," Ambani claimed.

Ambani also targetted the skeptics and analysts, who doubted the success of the Jio network and said that the Jio's achievements have very few parallels anywhere in the world.

"Before the launch of Jio, skeptics said that the VoLTE is a globally unproven technology, but we proved them wrong. Jio users consistently made more than 250 crore minutes of voice and video calls every single day," he said.

Ambani added that analysts believed that Indian could never be largest data market in the world and Jio, again, proved them wrong.

"Jio customers alone are consuming 125 crore GB of data every month and this includes 162 crore hours of high-speed video that people are using on their phones making Jio the largest mobile network. India has overtaken U.S. and China is mobile data usage. Before Jio, Indian was on 155th rank in the world in the mobile broadband penetration, and now it is No. 1 in mobile data consumption," Ambani said.

Ambani thanked Prime Minister Narendra Modi for digitally empowering India and his vision, which allowed the benefits of the technology to be passed on directly to the Indian customers.

Ambani also took another dig at the skeptics, who claimed that free users would never turn into paid users, and said that Jio customers proved them wrong.

"We have converted majority of our free customers to paid customers. Jio is a customer-obsessed organisation and will always walk an extra mile in serving them every single day," he said.

The company said that the Jio network in the next 12 months would cover 99 percent of the country's population and because of that India's 4G coverage will be more than India's 2G coverage.

"By September, we will have 10,000 offices across every city, tehsil and town of India. These offices will serve as sales channel and physical retail outlets," he said.

While he choked up delivering this part of the address, his mother in the audience shed tears as the gathering remembered late Dhirubhai Ambani.

"In just four phenomenal decades, Reliance has grown from a startup to one of the largest and the most admired companies in the world. No Indian corporate has expanded so much and so fast in scope, scale, size and service to the nation," Mukesh Ambani said.