PM Modi: Make in India has emerged as a global brand


Tokyo: Hailing the various development projects in India, Prime Minister Narendra Modi on Monday said that the central government’s Make in India initiative has emerged as a global brand today.

“Make in India has emerged as a global brand today. We are manufacturing quality products not only for India but for the world. India is becoming a global hub, especially in the field of electronics and automobile manufacturing. We are rapidly moving towards becoming number one in mobile phones manufacturing,” Prime Minister Modi said while addressing an Indian Community Event here as part of the 13th India-Japan Annual Summit.

“Last year our scientists created a record by launching over 100 satellites into space simultaneously. We sent Chandrayaan and Mangalyaan at a very low expense. India is now preparing to send Gaganyaan into space by 2022. It will be Indian in all ways,” he added.

Prime Minister Modi further invited the audience to attend the Rashtriya Ekta Diwas(National Unity Day) scheduled to be celebrated on October 31 on the birth anniversary of Sardar Vallabhbhai Patel.

“We celebrate Sardar Patel's birth anniversary every year, but this time we will surely grab the attention of the entire world. In Gujarat, his birthplace, Sardar Patel's statue - the tallest in the world - is being built. I invite you all to attend the event,” he said. 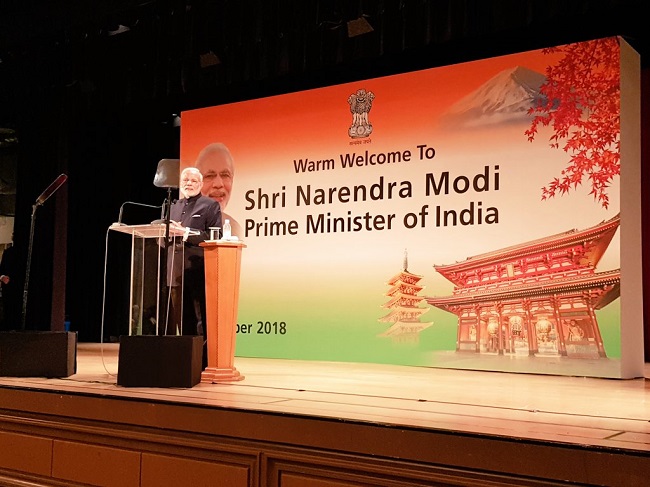 Prime Minister Modi will next attend a meeting of the India-Japan Business Leaders Forum later in the day, prior to addressing the ‘Make in India: India-Japan Partnership in Africa and Digital Partnership’ seminar.

He will also hold delegation level talks with his Japanese counterpart and discuss the strengthening of collaboration in key areas such as defence, security, Indo-Pacific cooperation, and technology as well as review the progress of India-Japan ties. (ANI)