PM Modi: Muslim community should save daughters from triple talaq

Prime Minister Modi said, "I believe people from Muslim community would come up to solve the issue of triple talaq and act as savior to the Muslim women in this crucial period."

New Delhi: Prime Minister Narendra Modi on Saturday appealed to the Muslim community to find for proper solution to end the controversial practice of triple talaq.

Addressing the Basva festival, Prime Minister Modi told media, "I believe people from Muslim community would come up to solve the issue of triple talaq and act as savior to the Muslim women in this crucial period."

He went on to say that there should be no discrimination in the country, adding that Sabka Saath Sabka Vikas is the motto of his government and it will fulfill promises made to the people without any discrimination.

Expressing happiness over the feedback received from Pradhan Mantri Mudra Yojana, Prime Minister Modi said, "It is very surprising to see that more than 70 percent of women applied for the mudra loan for their small scale business."

He further asserted that irrespective of any kind of discrimination every person should own a house.

On the eve of Basva festival, Prime Minister advised to launch a quiz competition throughout the year which would be held online where people of different ages would participate enhancing their educational skills.

He also released the digital version of the work at the first ever celebration of Basava Jayanthi at the national level in New Delhi. 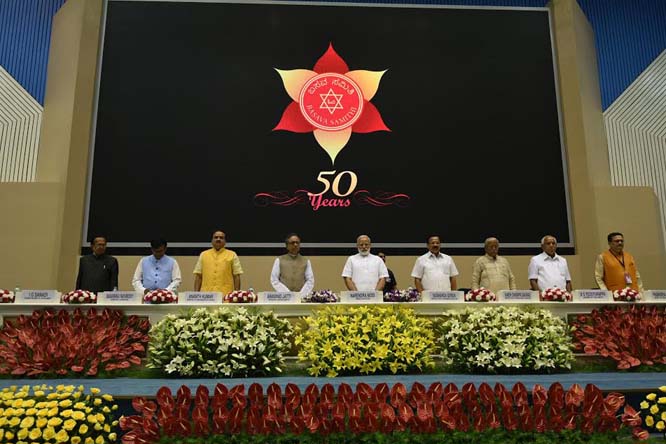 Speaking on the occasion, the Prime Minister said that India's history is not only about defeat, poverty or colonialism but the country gave the message of good governance, non violence and Satyagraha to the world.

Vachana is a prosaic form well known in the Kannada literature which propagate values of universal brotherhood. This style of writing was used by Basavanna for spreading social awareness and bring equality in the society in the 12th century.

The 23 Vachana volumes, edited by esteemed literary scholar late M M Kalburgi and translated by more than 200 people, was commissioned by the Bengaluru based Basava Samithi at a cost of 2.5 crore rupees of which, the Karnataka government contributed 1 crore rupees.

The event also coincides with golden jubilee of Basava Samiti, set up by former Vice President B D Jatti in 1964 with an aim to spread Basavannas message across India. (ANI)