"Wherever the BJP goes, it spreads hatred. Makes one person fights with the other." -Rahul Gandhi at Sitapur.

Sitapur, Uttar Pradesh: Taking a jibe at Prime Minister Narendra Modi, Congress vice-president Rahul Gandhi on Thursday said the former only wants to stay in power, adding that he doesn't need to form government in Uttar Pradesh in order to waive off the loans taken by farmers.

"Prime Minister Modi only wants to stay in power, he doesn't want to speak the truth that there is much power in this state," said Gandhi while addressing a rally in Uttar Pradesh's Sitapur.

"Prime Minister Modi doesn't need to form government in Uttar Pradesh to waive off the loans of farmers. He can easily do that as he is the Prime Minister," he added. 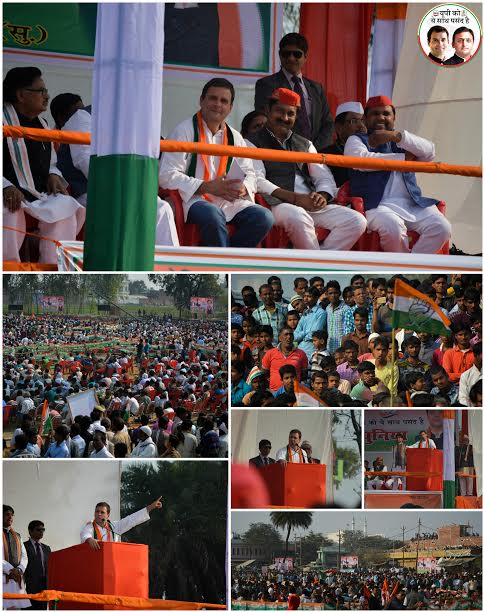 The Congress vice-president further vowed to open free coaching centres for youth in every city of Uttar Pradesh.

Gandhi further hit out at the Prime Minister over the demonetisation drive saying that the latter should listen to the plight of the people.

Gandhi yesterday launched a scathing attack at Prime Minister Modi, saying that work is not the latter's cup of tea.

"One can only expect Modi ji's to give speeches. Work is not his cup of tea. Work will be done by Akhilesh Yadav," said Gandhi while addressing an election rally in Uttar Pradesh’s Barabanki.

Continuing his tirade against the Bharatiya Janata Party (BJP) and Rashtriya Swayamsevak Sangh (RSS), Gandhi said the only work of the two parties has always been to spread hatred.

"Wherever the BJP goes, it spreads hatred. Makes one person fights with the other," he said. (ANI)