Stepping up attack against Prime Minister Narendra Modi, Congress President Rahul Gandhi on Friday reiterated the alleged Rafale scam is an "open and shut" case, adding that if the inquiry is initiated "Prime Minister Modi is not going to survive".

New Delhi: Stepping up attack against Prime Minister Narendra Modi, Congress President Rahul Gandhi  on Friday reiterated the alleged Rafale scam  is an "open and shut" case, adding that if the inquiry is initiated "Prime Minister Modi is not going to survive".

The Congress chief asserted that the alleged  Rafale scam is a "PM Modi-Anil Ambani partnership".

The Dassault CEO had said the reason HAL wasn't given the contract was because Anil Ambani had land. Now it turns out that the land that Anil Ambani had was purchased by money given by Dassault : Congress President @RahulGandhi #RafaleBribeRevealed pic.twitter.com/WtaN3S2hlf

"Dassault invested Rs 284 crore in the company of Anil Ambani  bought land with the same money. This is clear that CEO is lying. Why did they invest Rs 284 crore in a loss-making company? Rafale is an open and shut case. It is simply a PM Modi-Anil Ambani partnership," he said.

Sharing the details of the alleged scam, Gandhi explained reasons as to why the Rafale deal was bagged by Reliance Defense.

"The Dassault CEO said that the reason HAL wasn't given the contract and Anil Ambani  was given the contract because he had land, now, the things turned out that the land Anil Ambani  had was purchased for him with money that he got from Dassault. For some reason, which is hard to understand Dassault gave Rs 284 crore to a loss-making company with the valuation of Rs 8 lakh thirty thousand. This is one of the many trenches of money that Dassault has paid in kick-back," the Gandhi scion detailed.

Gandhi continued to target the Prime Minister, and said the latter will not survive if an inquiry is initiated into the alleged irregularities.

"If an inquiry starts on this Prime Minister Modi is not going to survive it. Guaranteed. One, because of corruption. Two, because it's very clear who the decision maker was. It was Prime Minister Narendra Modi and it was a deal done by him to give Anil Ambani  Rs 30,000 crore," Rahul alleged. 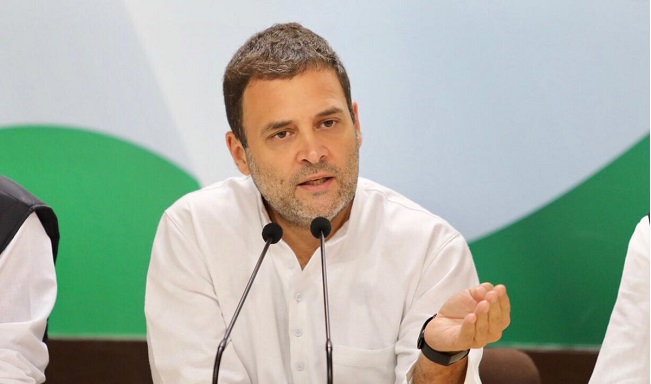 A controversy over Rafale jet deal has been on the boil over the last few months with the Congress and other opposition parties alleging loopholes in the high-profile pact signed between India and France in 2016.

The Congress has been accusing the Centre of irregularities in the Defence fighter jets' contract, alleging that the Prime Minister Narendra Modi-led government was procuring each aircraft at a cost of over Rs 1,670 crore as against Rs 526 crore finalised by the United Progressive Alliance (UPA) government.

The Congress has time and again asked the government to reveal the price details of the aircraft and how the sum being paid for each has shot up. However, the government has refused to share the details, citing a secrecy clause of a 2008 pact between India and France. (ANI)