The Congress leader said that his party has collected over 3.2 million signatures of Indian men and women to support the Bill.


New Delhi: Ahead of the commencement of the monsoon session of Parliament, Congress President Rahul Gandhi on Monday wrote a letter to Prime Minister Narendra Modi seeking his support to ensure passage of the Women's Reservation Bill.

The Congress leader said that his party has collected over 3.2 million signatures of Indian men and women to support the Bill.

"I write to request your support to ensure the passage of the Women's Reservation Bill in the upcoming Monsoon session of Parliament," Rahul wrote in the letter.

The monsoon session of Parliament starts on July 18. 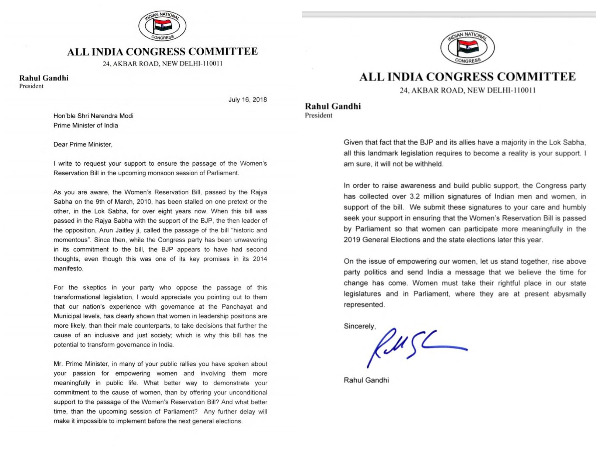 The Bill was passed during the Congress rule in Rajya Sabha in March 2010. However, it got stalled in Lok Sabha.

"When this Bill was passed in the Rajya Sabha with the support of the BJP, the then Leader of the Opposition, Arun Jaitley, called the passage of the Bill historic and momentous. Since then, while the Congress party has been unwavering in its commitment to the Bill, the BJP appears to have had second thoughts, even though it was one of its key promises in its 2014 manifesto," Rahul said in the letter.

He further requested the Prime Minister to point out to BJP leaders how "nation's experience with governance at the Panchayat and Municipal levels, has clearly shown that women in leadership positions are more likely, than their male counterparts, to take decision that further the cause of an inclusive and just society."

Rahul concluded his letter saying, "On the issue of empowering our women, let us stand together, rise above party politics and send India a message that we believe the time for change has come." (ANI)

Rahul Gandhi: No one can save PM Modi from Rafale probe