"Under Rule 198(B) of chapter XVII of the Rules of Procedure and Conduct of business in Lok Sabha, I hereby give notice to move the following motion in the House on Today Dated 16.03.18," TDP MP Thota Narasimha said in the letter.


New Delhi: The Telugu Desam Party (TDP) on Friday wrote to the Lok Sabha Secretary-General for moving a motion on 'No-Confidence in the Council of Ministers' in the House.

"Under Rule 198(B) of chapter XVII of the Rules of Procedure and Conduct of business in Lok Sabha, I hereby give notice to move the following motion in the House on Today Dated 16.03.18," TDP MP Thota Narasimha said in the letter.

"This House expressed No confidence in the Council of Ministers," read the Motion stated therein.

The opposition party in Andhra Pradesh, YSR Congress Party also gave the notice to move a no-confidence motion in the Lok Sabha.

Meanwhile, Congress Andhra Pradesh Congress Committee President N Raghuveera Reddy announced that the Congress would back the motion by TDP and YSRCP.

"We have been supporting Special Category Status for Andhra Pradesh since the beginning. We want that people of Andhra get justice. When no-confidence motion is moved you have to talk about government's failures, we are contacting a lot of people," Senior Congress leader Mallikarjun Kharge.

The Communist Party of India (Marxist) will also be supporting the Motion. 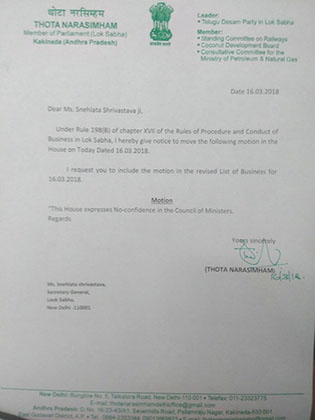 CPI(M)'s Sitaram Yechury tweeted, "CPI(M) supports the no-confidence motion being brought against the BJP government. Its betrayal of the promise of special status for Andhra Pradesh is inexcuseable. Its all-round failure and evasion of parliamentary accountability needs to be highlighted."

Meanwhile, TMC Supremo and West Bengal Chief Minister Mamata Banerjee also tweeted in support of TDP and said, "I welcome the TDP's decision to leave the NDA. The current situation warrants such action to save the country from disaster. I appeal to all political parties in the Opposition to work closely together against atrocities, economic calamity and political instability."

Earlier in the day, the TDP pulled out of the National Democratic Alliance (NDA) following a period of sour relations between the allies over the issue of granting 'Special Category status' to Andhra Pradesh. (ANI)

Lok Sabha to meet at 2 pm on Monday

SPG amendment bill to be introduced in LS next week