Trump said,"We condemn hate in all its ugly forms, the threats targeting Jewish centres and the Kansas shooting."

Washington D.C: U.S. President Donald Trump in his opening speech at a joint session of Congress said the country is united in condemning hate and evil in all its forms.

"We condemn hate in all its ugly forms, the threats targeting Jewish centres and the Kansas shooting," Trump said.

"I've directed the DOJ to "form a task force on reducing violent crime," he added.

"Moments ago, I led my colleagues in a moment of silence on the House floor for the victims of last week's shooting in Olathe," Rep. Kevin Yoder tweeted.

White House spokesperson has condemned the Kansas shooting, where an Indian engineer was shot to death in an alleged racial attack by a gunman, saying that the shooting appears to be "an act of racially motivated hatred." 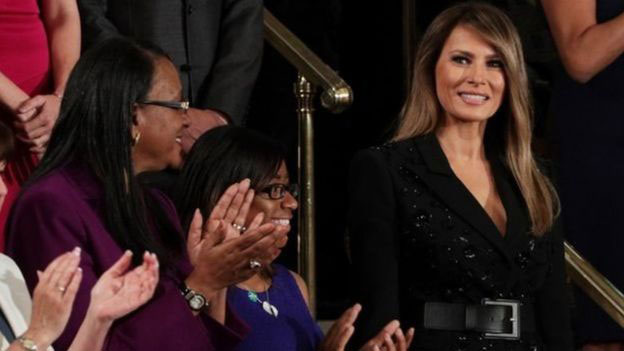 "As more facts come to light and it begins to look like this was an act of racially motivated hatred," CNN quoted White House spokeswoman Sarah Sanders as saying.

Asserting that such attacks have no place in the United States, Sanders said that she wants to reiterate the President condemns these or any other racially or religiously motivated attacks in the strongest terms.

She added that the President is "keeping the family of the victim who was senselessly killed in his thoughts and praying for the full and speedy recovery for those who were wounded."

Also Read: Indian killed in Kansas: Indian Consulate assures assistance to deceased's family
An Indian engineer Srinivas Kuchibhotla was shot to death in Kansas in an alleged racial attack, after the gunman was heard shouting "get out of my country".

According to local media, the gunman, Adam Purinton, 51 who is a Navy veteran was arrested after fleeing the spot of incident, after he allegedly blasted off several rounds on Thursday.

He was reportedly taken into custody by the police at Applebee's in Clinton, Missouri, about 82 miles southeast of Olathe.

Purinton was working as a desktop support specialist for an information technology company in the Kansas City area.

The last rites of Kuchibhotla were performed on Tuesday, amidst a wave of emotional upheaval.

Rituals were performed at Kuchibhotla's residence in Hyderabad.

Also Read: Trump does it again, brands media as "great danger to our country"
Police personnel were deployed at the cargo terminal building and Minister of Transport for Telangana, Mahender Reddy was earlier present at the airport but left due to flight's delay.

Kuchibhotla was killed when 52-year-old Adam Purinton, walked into Austins Bar and Grill in the Kansas City suburb of Olathe and opened fire on Wednesday evening.

Kuchibhotla's friend, Alok Madasani, and Ian Grillot, a bar-goer who tried to intervene in the attack, were also shot, but survived.

Witnesses told local media they heard the suspect yell, "Get out of my country." Meanwhile, the FBI has launched an investigation to determine whether the shooting was a hate crime.