UP: Electricity Department Opens A Front Against Habitual Criminal, Complains To District Administration For Strict Action Against Criminal

Another video of habitual criminal of Maharajganj district is viral on social media in which he is accusing UP electricity department employees corrupt and bribe seekers causing ripples of anger and exasperation among them. Dynamite News Exclusive: 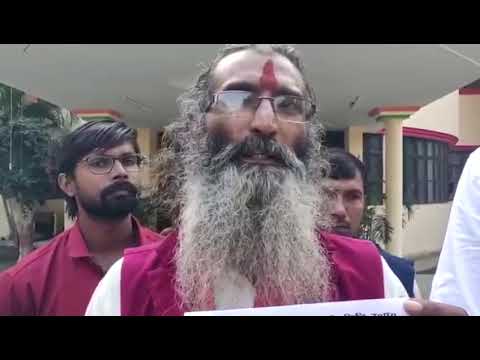 Maharajganj: Habitual criminal Pashupati Nath Gupta of the district has already been booked under half a dozen FIRs in serious sections like attempt to murder, SCST, obstructing government officials, assaulting policemen and blocking roads, hooliganism and anarchy but his gundagardi is still continuing and thus he is challenging the law and order situation.

Habitual criminal Pashupati Nath Gupta in another viral video has accused all the electricity linemen across UP as corrupt. He has further accused them of 'taking bribe Rs. 300-600 from consumers even for a small job.

After this video went viral, the employees of the electricity department across the state became so agitated that on Saturday, officers and employees of various organizations of electricity department of Maharajganj district submitted a written memorandum to the district administration demanding an FIR against the accused and also his immediate arrest. The memorandum was submitted under the leadership of Upendra Chaurasia, convener of Vidyut Karmachari Sanyukt Sangharsh Samiti.

After submitting the memorandum, the officials, while talking to media said that Pashupati Nath Gupta himself did not want electronic meter to be installed at his house to avoid bill of actual consumption of electricity. When the officials of the electricity department went along with the vigilance team and changed the meter of his house according to the rules, he called the linemen thieves.

They further said that if an FIR is not registered against Pashupati Nath immediately they would be forced to boycott work.

Earlier, Superintendent Engineer of Electricity Department YP Singh, Executive Engineer Krishnanand and SDO Upendra Nath Chaurasia had given a complaint to the District Magistrate accusing this habitual criminal of obstructing government work, ruckus and misbehaviour. After the intervention of higher officials, on 30 October, an FIR was registered against him in Sinduria police station of the district under case number 176/2022, section 353, 500, 506, but even after almost two weeks, he has not been arrested. As a result this Pashupati Nath is now attacking even the media.  He called the Superintendent Engineer on mobile and threatened to vandalize his office.

After this controversial video went viral, the people in the district are agitated and demanding immediate registration of FIR against Pasipathi Nath followed by his arrest. His gang off and on creates hooliganism and ruckus in the city and vandalise even government offices.

According to police records, half a dozen serious criminal cases are already registered against this habitual criminal Pashupati Nath Gupta in several police stations of the district. Main cases are:

UP: Hacker tries to blackmail the couple after morphing their photo on Facebook