Taking a dig at Pakistan Prime Minister Imran Khan, senior Rashtriya Swayamsevak Sangh (RSS) functionary Krishna Gopal Sharma on Saturday thanked him for saying that the Sangh and India are synonymous and making the world aware of the fact that the RSS stood against terrorism.

New Delhi: Taking a dig at Pakistan Prime Minister Imran Khan, senior Rashtriya Swayamsevak Sangh (RSS) functionary Krishna Gopal Sharma on Saturday thanked him for saying that the Sangh and India are synonymous and making the world aware of the fact that the RSS stood against terrorism.

"The RSS works only in India and doesn't work in Pakistan. We don't have any branches. RSS and India have become synonymous now, as these people who are angry with us are angry with India. We always wanted the world to see RSS and India as one," said Sharma at an event here.

Though Sharma was reluctant to respond to Khan's comment on RSS in his address in the United Nations General Assembly (UNGA) wherein he compared the ideology of RSS with that of Hitler and Mussolini, he elaborated on the subject and thanked Khan for making RSS 'popular' in the world. 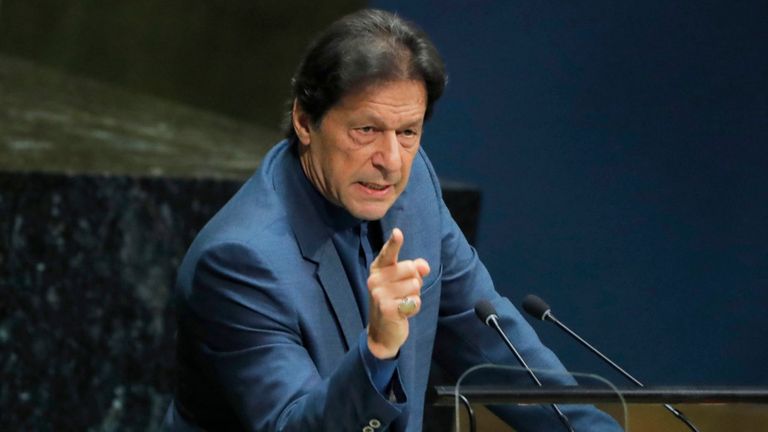 "Now the world is asking what is this RSS that is facing protest from so many countries. What do we have to do with Imran Khan? And not even a single RSS worker has ever spoken to him. We may not know if one had. We don't know why he is upset with us," he said.

"Imran Khan has done it beautifully. We must congratulate him for making us world-famous," said Sharma.

He also said that those who are aggrieved by terrorism are now at least thinking that the RSS is one organisation, which is against terrorism. "So pray to god that Imran should not stop speaking," added the RSS functionary.Not just RSS, BJP leaders too came down heavily on Khan for speaking against India and RSS.Union Minister of State (MoS) for Farmer Welfare and Agriculture Kailash Choudhary also made stinging remarks on Khan.

"Pakistan PM's language is a language spoken by terrorists. It is not his own. The country has nurtured terrorists and never thought this will bite them one day," he said.

#WATCH RSS leader Dr Krishna Gopal Sharma says, "RSS is only in India. We don't have any branches anywhere in world. If Pakistan is angry with us it means they are angry with India. RSS & India are synonyms now. We also wanted the world to see India & RSS as one." pic.twitter.com/uuYHdPF71B

"RSS ideology has been well respected in the world. I am also a 'swayamsevak.' What RSS teaches is patriotism," added Choudhary.

Taking on the Congress, Choudhary said: "There are a few people in the Congress who give chance to Pakistan to speak against the nation. Such people can not be nationalists." (ANI)