The four-day long Chhath Puja celebrations concluded today after lakhs of people across India and the world paid oblation to the rising sun.


New Delhi: The four-day long Chhath Puja celebrations concluded today after lakhs of people across India and the world paid oblation to the rising sun.

The festival, which is celebrated across various states-primarily in Bihar, Jharkhand and Uttar Pradesh, began on Sunday and concluded today after devotees offered 'arhgya' to the rising Sun and ended their 36-hour long fast.

Odisha: Devotees offer 'arghya' to the rising sun on the banks of Kuakhai river in Bhubaneswar. #ChhathPuja pic.twitter.com/peCLKk9wMo

The Chhath Puja is celebrated on the sixth day of the Kartik month of the Hindu calendar which also happens to be the fourth day after Diwali.As per the Hindu tradition, devotees worship the Sun God and his wife Usha to express gratitude and seek their blessings.

According to Hindu mythology, Draupadi, the common wife of the Pandavas, was unhappy and troubled. In order to get rid of suffering, she was advised to pray Sun God and observe Chhath Puja. She observed the fast and got rid of her sufferings. Another story about the festival revolves around Lord Ram and Goddess Sita. It is believed that the Goddess observed this fast after she returned home after spending 14 years in exile. From that particular day, devotees started celebrating the festival.

Day one of the festival is called Nahai Khai, which begins with devotees taking the holy dip in Ganga River. On the next day, devotees observe a full-day fast which is completed in the evening after praying to the sun and the moon during sunset. Third day is called 'pehla argha' or 'saandhya argha'. The devotees and their families go to the river bank and offer prasad to the Sun God during sunset and pray for happiness and prosperity. On the fourth and the last day, which is the also is known as 'doosra argha',  devotees offer their prayers to the Sun God on the river banks before the sunrise and conclude their fast and eat special prasad and delicacies made for the festival

A large number of people gather on Ghats of various rivers and other water bodies since early morning. This festival is connected with purity, devotion to the Sun God, who is considered as the source of life on this earth and regarded as the deity who fulfils all wishes. 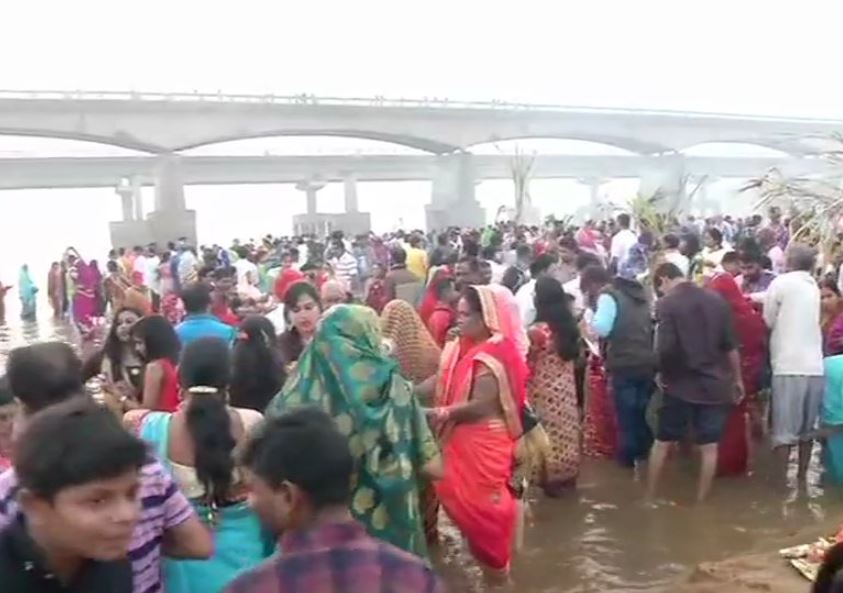 In Patna, people gathered on Ghats of Ganga, Kosi, Gandak and Sone rivers.

In Delhi, devotees paid oblation to the rising sun at various ghats of Yamuna river and also at India Gate.

Meanwhile, in Uttar Pradesh, the puja is being celebrated in eastern parts of the state with thousands of people paying oblation to the rising sun at different river ghats of Ganga,Yamuna and other rivers. (ANI)

UP: Two electrocuted at Chhath puja pandal in Ballia