70 % polling in Punjab; technical glitches, skirmishes at some places

Chandigarh / 4 February 2017. Punjab today recorded an estimated 70 per cent polling during which technical glitches and stray incidents of violence were reported in the state which is seeing a high-stake contest among Congress, new entrant AAP and ruling SAD-BJP combine.

Two persons were injured in a clash which took place between AAP and Congress workers at Sultanpur village in Sangrur district, police said.

In Tarn Taran district, a Congress worker identified as Jagjit Singh was injured when an Akali supporter allegedly opened fire at him outside a polling booth in Lalu Ghuman village, they said.

A large number of voter-verified paper audit trail (VVPAT) machines, installed for the first time in the ongoing Punjab Assembly polls, developed snags during the polling process in the state.

A technical snag was reported in VVPAT machines in Majitha and Sangrur, an election office spokesman said, adding that the matter had been referred to the ECI. 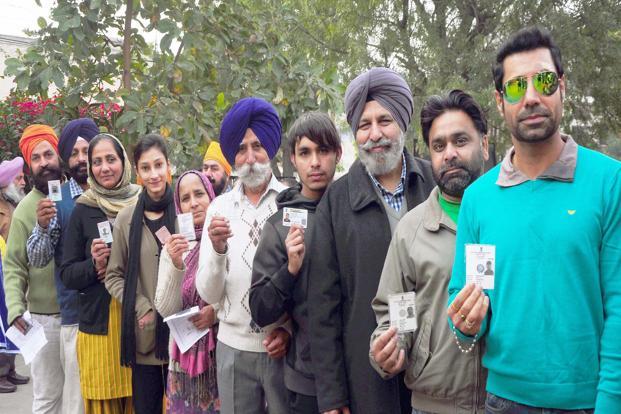 Due to a snag in the machines, polling had to be called off a number of times, Punjab Chief Electoral Officer (CEO) V K Singh said, adding that these machines were replaced by others.

Over 79 per cent electors had cast their votes in the 2012 assembly polls. The final figure of today's voting is still awaited as all those who were inside the polling booths will be allowed to vote, an election official spokesman said here.

Shortly before the polling was to end, Chief Minister Parkash Singh Badal "thanked Punjabis for peaceful polling and reposing faith in SAD-BJP alliance."

A statement issued by Badal's spokesman quoted him as saying, "Moved by people's love despite negative agenda."

However, this time around 70 per cent out of the total 1.98 crore electors exercised their franchise to seal the fate of 1,145 candidates including Chief Minister Parkash Singh Badal, his son and Deputy, Sukhbir Singh Badal, Cabinet Minister Bikram Singh Majithia and Punjab Congress President and the party's chief ministerial candidate, Capt Amarinder Singh.

The total number of candidates in the fray include 81 women and a transgender.  (PTI)