Amitabh Bachchan on Saturday showered praise on his co-stars, Alia Bhatt and Ranbir Kapoor and shared some endearing photographs on social media.

Bachchan recently teamed up with Alia and Ranbir for the upcoming Ayan Mukherji directorial 'Brahmastra.' 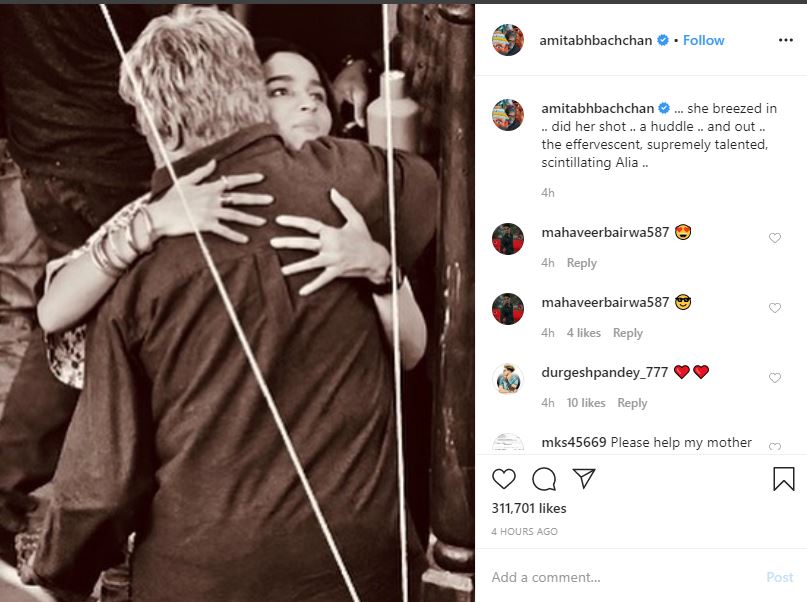 The 77-year-old star shared a picture of him hugging the ' Kalank' actor and wrote: "... she breezed in .. did her shot .. a huddle .. and out .. the effervescent, supremely talented, scintillating Alia .."

He also shared multiple pictures with the 'Rockstar' actor on Twitter in which they can be seen sitting casually on the sets.

In the series of pictures shared, Bachchan is seen following Ranbir's instructions on the use of earplugs.

He captioned the post as: " he teaches and sets up for me the sound earplugs .. they sound good .. good riddance of the wires and cables .. !!" Helmed by Ayan Mukherji, 'Brahmastra' is the first part of a sci-fi trilogy.

The film has been extensively shot in Bulgaria, New York, and Mumbai, among other places. The film also stars Mouni Roy and Tollywood actor Nagarjuna. (ANI)