Expressing her excitement to share the much-anticipated trailer of her horror-drama 'Durgamati', actor Bhumi Pednekar on Wednesday shared a gripping trailer of the film.

Mumbai: Expressing her excitement to share the much-anticipated trailer of her horror-drama 'Durgamati', actor Bhumi Pednekar on Wednesday shared a gripping trailer of the film.

The 31-year-old star took to Instagram and shared a spooky trailer, in which the actor is seen in a never-seen-before avatar. The trailer focuses an ensemble star cast featuring Arshad Warsi, Mahie Gill, Jisshu Sengupta and Karan Kapadia in prominent roles. 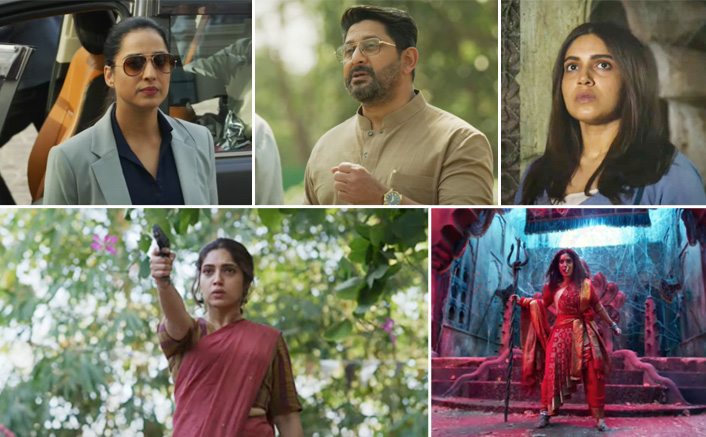 The three-minute-twenty-second trailer is a thrilling, scary ride that tells the story of an innocent Government officer who is made the victim of a major conspiracy involving powerful forces. The trailer showcases chilling glimpses of an ancient fort, titled- 'Durgamati'. Bhumi enters the Durgamati haveli, only to find out that the palace has more secrets than earlier imagined. As the trailer progresses it shows Bhumi getting possesssed by a spirit and switching into a ferocious avatar.

The trailer of 'Durgamati' is a scary ride that will surely give goosebumps.

Bhumi noted in caption of the trailer, "I have waited so long to share this with all of you. This one is pure sweat, blood & hard work. There were moments of pure joy and times I cried of pain. My most special & challenging one so far."

The actor also penned a note of thanks to the film's cast and crew. She added, "Thank you @akshaykumar sir, @ashokdirector @ivikramix & #BhushanKumar for making this happen & believing in me, only gratitude and love for all of you. To the best cast ever. I adore you all and feel fortunate to have had the chance to share screen space with you :) @arshad_warsi sir, @mahieg @senguptajisshu @karankapadiaofficial."

"And to my special crew & all HOD's. This is equally your sweat and blood as it is mine. To every technician and crew member - THANK YOU .kuldeepmamania @tariqueumarkhan @prynkamundada @babita.ashiwal @jakes_bejoy@shikhaarif.sharma a special hug to you for being my person in arms and a Hands on boss woman.Team Bhumi @kavitadasofficial @aliyashaik28 @melomaniacc #Upi #Swapnil @purvadukia couldn't have done this without your support & love."

On Tuesday, Pednekar had unveiled a poster from 'Durgamati The Myth' and announced that the trailer will be released on Wednesday. Earlier, the movie was titled 'Durgavati', later the makers have changed the title of the film.

Presented by T-Series and Cape of Good Films and is an Abundantia Entertainment production, the movie will be released on Amazon Prime on December 11. (ANI)