The protesters, which include members of the Congress Working Committee (CWC) - the highest decision-making body of the party are expected to participate in "PM House gherao" later in the day. The party's state units will hold similar protests across the country. Full story on Dynamite News: 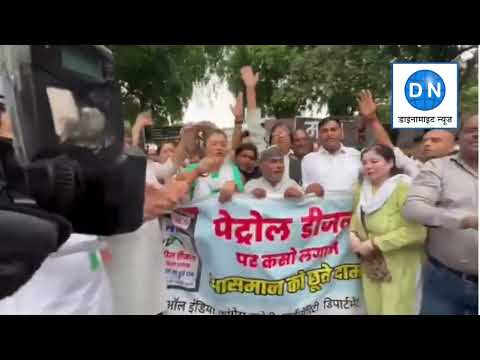 New Delhi: The Congress party is staging a massive nationwide protest on Friday on issues of price rise and unemployment.

Lok Sabha and Rajya Sabha MPs will hold a "Chalo Rashtrapati Bhavan" from Parliament, the party said in a statement.

The protesters, which include members of the Congress Working Committee (CWC) - the highest decision-making body of the party are expected to participate in "PM House gherao" later in the day. The party's state units will hold similar protests across the country.

This comes ahead of Congress MP Rahul Gandhi's address today at All India Congress Committee (AICC) headquarters in the national capital.Ahead of the march, Congress leaders have gathered at the party headquarters in Delhi.

The Delhi Police has imposed Section 144 CrPC in the entire area of the New Delhi district except for Jantar Mantar. The police said that protest/dharna/ gherao in the area of New Delhi district on August 5 cannot be permitted in view of security, law, and order, and traffic reasons.

Senior Congress leader Ajay Maken earlier this week said that they had received a letter from the DCP that they can't protest on August 5 and the AICC (All India Congress) was turned into a Police cantonment. "The government may suppress us as much as they want but we'll protest against inflation, unemployment, GST on edible items and go ahead with our schedule even if jailed," he said.

Leader of Opposition in Rajya Sabha Mallikarjun Kharge meanwhile sparred with Leader of the House Piyush Goyal on Thursday over ED summons issued to the Congress leaders. While Kharge accused the central government of trying to demoralise and intimidate the Opposition, Goyal responded by claiming that the government does not interfere in the functioning of law-enforcement agencies.

Earlier, the Enforcement Directorate on Wednesday sealed the Young Indian Ltd office located in the National Herald building in New Delhi as part of the ongoing money laundering investigation. The agency has already questioned Congress chief Sonia Gandhi and her son and party leader Rahul Gandhi in the case. (ANI)

Highlights of Rahul Gandhi's press conference on the issue of inflation