The national capital wore a deserted look on Monday morning. Fewer vehicles were seen plying on roads as prohibitory orders are currently in force across the city in wake of the coronavirus outbreak.

New Delhi: The national capital wore a deserted look on Monday morning. Fewer vehicles were seen plying on roads as prohibitory orders are currently in force across the city in wake of the coronavirus outbreak.
According to the Indian Council of Medical Research (ICMR), the total number of novel coronavirus cases in India has gone up to 396. The national capital has reported 29 confirmed cases.
The Delhi Metro Rail Corporation (DMRC) has announced the closure of metro train services till March 31 and only 25 per cent of Delhi Transport Corporation (DTC) buses will hit the roads. No other modes of public transport including private buses, taxis, auto-rickshaws, rickshaws and e-rickshaws shall be permitted during the lockdown period. Cab operator Uber has temporarily suspended all ride services in the city, while OLA said it "will enable minimal network of vehicles to support essential services". 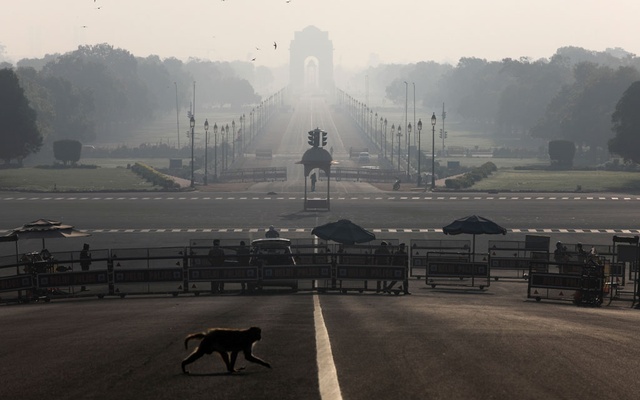 Chief Minister Arvind Kejriwal on Sunday announced a complete lockdown in Delhi from March 23 till March 31 for the prevention and containment of COVID-19.
The government said that all shops, commercial establishments, factories, workshops, offices, godowns, weekly markets shall stop their operations and only essential services/establishments have been exempted from the lockdown.

The Delhi police has imposed section 144 of CrPC which prohibits assembly of four or more people in one place till March 31. Police has put up barricades on the border areas including Kapashera which connects Gurugram to Delhi and Vasudhara Enclave which connect Noida with the city. Police officials at the borders were seen asking people to go back and were only allowing those exempted from the lockdown order.
Fewer people were seen at Rajpath, where residents of the city usually come for their morning walk or a jog. Roads in Connaught Place and other adjoining areas, which normally remain congested due to a large number of shops, restaurants and offices located here, were almost empty. Several shops have put posters announcing that they will remain closed till March 31.
"There is no problem in the milk supply of Mother Dairy. People will get regular supplies. We are opening and closing the booth as we did earlier," an official at the Mother Dairy booth in RK Puram said.
Residents said that they are not facing any problems in the supply of milk. The government has issued an advisory asking people to stay indoors in a bid to contain the spread of the virus. (ANI)