Actor Jenna Dewan is thrilled to become a mother again and is sharing her excitement with her fans through social media.


Washington DC: Actor Jenna Dewan is thrilled to become a mother again and is sharing her excitement with her fans through social media.

Hours after People confirmed that Dewan and her beau Steve Kazee were expecting their first child together, the actor showed off her baby bump in a sweet post on the photo-sharing application.

Also Read: Lisa Haydon- Hope to come back to movies after pregnancy

In the still, Dewan can be seen snuggling with her 6-year-old daughter Everly, whom she shares with ex and actor Channing Tatum. In the caption, she opened up about welcoming another child into the world. 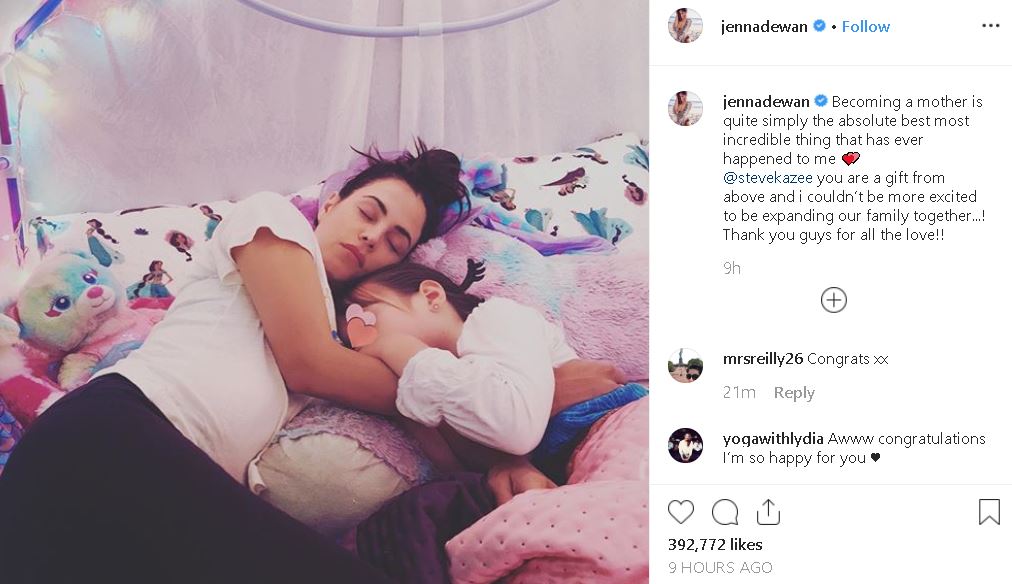 "Becoming a mother is quite simply the absolute best most incredible thing that has ever happened to me. Steve Kazee you are a gift from above and I couldn't be more excited to be expanding our family together. Thank you guys for all the love," the caption read.

Kazee also joined his lady love Dewan in relishing the happy news, calling the moment something he has waited his entire life for and went on to gush about his girlfriend for everything that she has brought into his life.

"Well...the news is out. I can't even begin to describe the feelings that I have had since we first learned that Jenna was pregnant! I have waited my entire life for this moment and couldn't have found a better person to build a family with," Kazee wrote alongside a photo of Dewan smiling and cradling her bump.

Kazee also credited Dewan for showing him how to parent, love and communicate with a child.

Earlier in the day, the couple shared exclusively to People that they were expecting their first child together.

"We are beyond overjoyed and couldn't be happier to be expanding our family!" the couple said.

A source confirmed to the outlet in October 2018 that Dewan and Kazee had been "dating for a couple of months."

Dewan made her relationship Instagram official in June. The couple also made their official debut at WWE's Monday Night Raw in the same month. (ANI)