Kangana got severely injured during an intense sword- fighting sequence with co-star Nihar Pandya, when the latter's sword accidentally hit her forehead, causing a deep cut.

Mumbai: Actress Kangana Ranaut has suffered an injury while shooting "Manikarnika - The Queen of Jhansi" in Hyderabad and has been advised rest for five days.

Kangana got severely injured during an intense sword- fighting sequence with co-star Nihar Pandya, when the latter's sword accidentally hit her forehead, causing a deep cut.

The 30-year-old actress was soon rushed to a hospital and got 15 stitches on her forehead. The doctors have also advised her to rest for a few days. 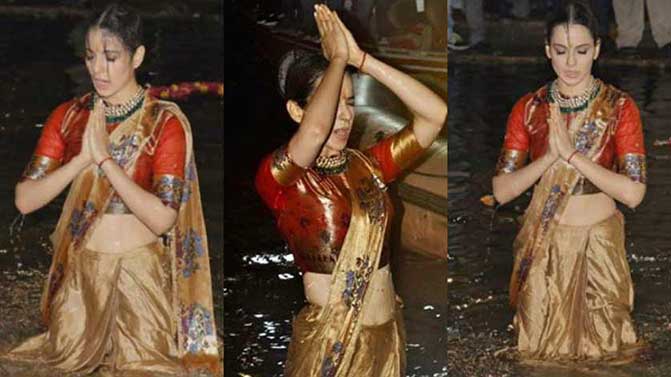 "I am a bit embarrassed to be thrilled to have a battle scar on my face. Also, people from my team have been telling me that it's like that Peshwa teeka that Manikarnika wore," Kangana said in a statement here.

"It's a bit dramatic but I am excited that my face was covered in blood and I got a genuine and authentic glimpse of the Queen's life."

Also Read: You can't take your eyes off from Karisma Kapoor's bikini pic

The actress has been training in sword fighting under Hollywood stunt director Nick Powell and also taking horse riding lessons.

Directed by Krish, "Manikarnika - The Queen of Jhansi" will see Kangana in the role of Rani Laxmibai of Jhansi. (PTI)

Esha Gupta's nude pics will take your breath away!

'Lipstick Under My Burkha' to release on July 28