Bollywood star Kangana Ranaut on Monday treated fans to an intriguing and fiery look from her upcoming action-thriller 'Dhaakad.'

Mumbai: Bollywood star Kangana Ranaut on Monday treated fans to an intriguing and fiery look from her upcoming action-thriller 'Dhaakad.'

The 'Queen' star took to Instagram and shared a picture that sees her in a fiery look as she is dressed in an all-black ensemble.

The picture sees the 'Panga' actor in skin-tight black denim pants and a matching top while holding a rifle in her hands. Sporting a high ponytail, Kangana has a bleeding head and some scratches on her face as she is ready to fight it out on the battlefield.

Fiercely holding onto a gun, Kangana shared the latest pictures from the sets of 'Dhaakad' and wrote, "They call her Agni... the brave one #Dhaakad. I say she is my depiction of Bhairavi the goddess of death ... #Dhaakad. 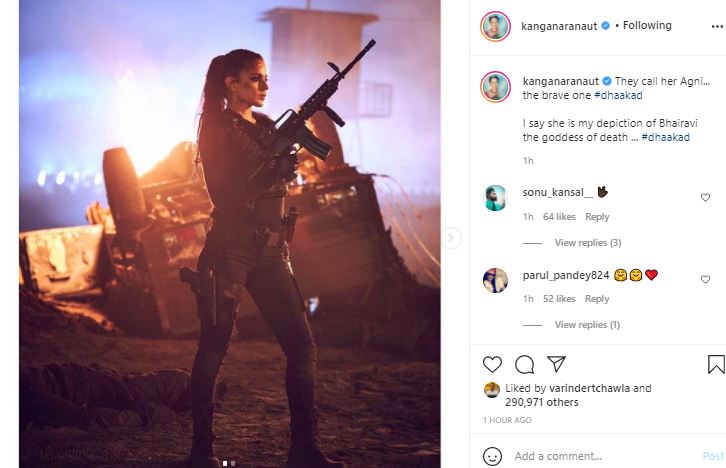 Recently, Kangana had showered 'Dhaakad' director Razy Ghai with praise for his dedication. Sharing the BTS video, the actor wrote, "Never saw a director who gives so much time and importance to rehearsals, one of the biggest action sequences will be shot from tomorrow night but amazed with the amount of prep, getting to learn so much, more than 25 crores being spent on a single action sequence #Dhaakad".

While she shoots for 'Dhaakad', Kangana will next be seen in 'Thalaivi', a biopic on actor-turned-politician Jayalalithaa.

Apart from this she also has 'Tejas' and 'Manikarnika Returns: The Legend Of Didda' in the pipeline. Kangana has also signed up to play the role of former Prime Minister Indira Gandhi in an upcoming political drama. (ANI)