The Uttar Pradesh government on Monday announced a judicial inquiry in the Lakhimpur Kheri incident stating that an FIR has been registered based on farmers' complaints. 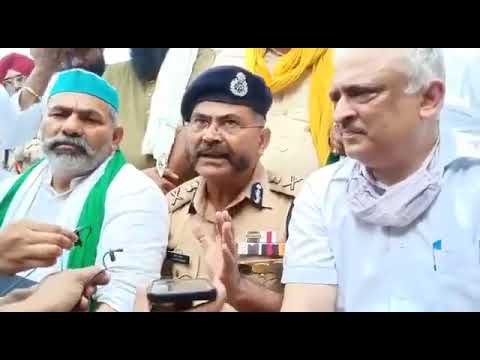 Lakhimpur Kheri: The Uttar Pradesh government on Monday announced a judicial inquiry in the Lakhimpur Kheri incident stating that an FIR has been registered based on farmers' complaints. Addressing a joint press conference flanked by BKU leader Rakesh Tikait, Additional Director General (Law and Order) of Uttar Pradesh police Prashant Kumar also informed that the farmers have now allowed the police to take the victims' bodies for postmortem after being assured of arrests soon.

"An FIR has been registered based on farmers' complaints under the relevant sections. A judicial inquiry will take place to probe the matter under a retired high court judge," the ADG said. "Government will give Rs 45 lakhs and a government job to the families of four farmers who died in Lakhimpur Kheri yesterday. The injured will be given Rs 10 lakhs," he said.

ADG Prashant Kumar further said that there will be arrests in the matter soon. "The bodies of the farmers that lost their lives in the incident are being taken for post-mortem," he added. The ADG also informed that no leader of any political party is allowed to visit the district because Section 144 of CrPC is in place.
However, the members of farmer unions are allowed to visit the district. As many as eight people died in the Lakhimpur Kheri incident on Sunday, said police. Additional Superintendent of Police, Lakhimpur Kheri Arun Kumar Singh confirmed eight deaths including four farmers and four occupants of the vehicles that allegedly ran over the farmers.

Samyukta Kisan Morcha, an umbrella body of several farmer unions, alleged that Ashish Mishra Teni, son of Union Minister of State for Home Affairs Ajay Mishra Teni arrived with three vehicles around the time that farmers were dispersing from their protest at the helipad and mowed down farmers and towards the end also attacked SKM leader Tajinder Singh Virk directly, by trying to run a vehicle over him.

However, Ashish Mishra refuted SKM's allegations and said he was not present at the spot where the incident took place. (ANI)

Retired soldier poisoned by sister-in-law in UP

Senior IPS OP Singh appointed as DGP of UP

UP CM Adityanath greets people on eve of Eid-ul-Azha