Mayawati in Kanpur: Would rather choose to sit in oppn than to form govt with BJP

BSP Chief said that we are ready to sit in opposition but will not form a government with the help of BJP.

Kanpur: Putting the speculation of entering into alliance with the Bharatiyan Janata Party (BJP) to an end, Bahujan Samaj Party (BSP) supremo Mayawati on Tuesday said her party would rather choose to sit in opposition than joining hands with the saffron party.

"We are ready to sit in opposition but will not form government with the help of BJP. No question to go with Samajwadi Party, Congress. There is no question of either supporting or extending support to the BJP or the SP-Congress alliance," Mayawati said while addressing a rally in Kanpur.

The BSP chief further hit out at BJP alleging that the latter is spreading rumours through social media that both the parties are going to form a government together.

Proclaiming that her party would win the popular mandate in the Uttar Pradesh Assembly election, Mayawati added that she did not require anybody's help to form government in the politically crucial state.

The former Uttar Pradesh chief minister also claimed that BSP candidates had received the lion's share of votes during the first phase of polling and the same thing would happen in the second phase as well. 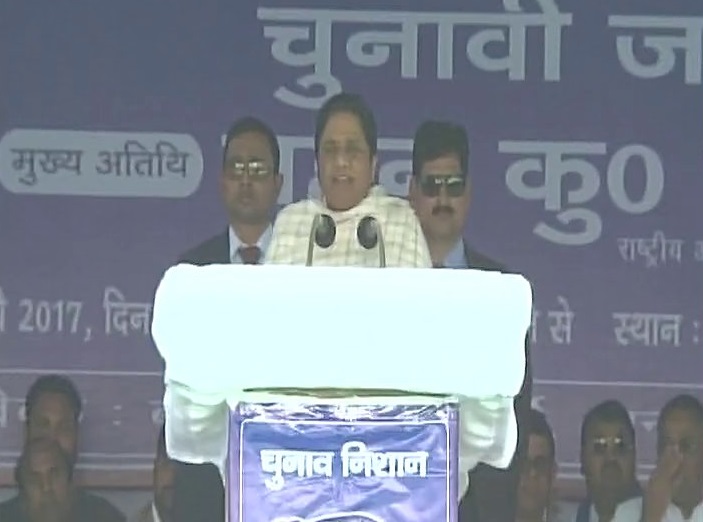 "BSP will remain number one. This is the reality. The BJP is building castles in the air and after the results are out, it will be at the bottom of the table," Mayawati said.

Taking a jibe at BJP president Amit Shah, Mayawati said the saffron party's chief was spending sleepless nights after the first phase of polling adding that the former had spread the rumours of a possible partnership with the BSP.

Around 63 percent voter turn out was recorded in the first phase of the Uttar Pradesh polls which was held on February 11.

The second phase of the polls will be held on February 15. (ANI)

BSP smells foul play, to observe black day on 11th of every month

UP will never impose its trust on 'adopted son' PM Modi, taunts Mayawati

Mayawati: 'Modi's hope of getting bonus votes in UP is imaginary'