"It is an honour to unveil the bust of Bapu at Yonsei University in Seoul. This becomes even more special because we are doing so at a time when we mark the 150th birth anniversary of Bapu,"  Modi said.

He said, "Through his lifestyle, Bapu showed what living in harmony with nature is." 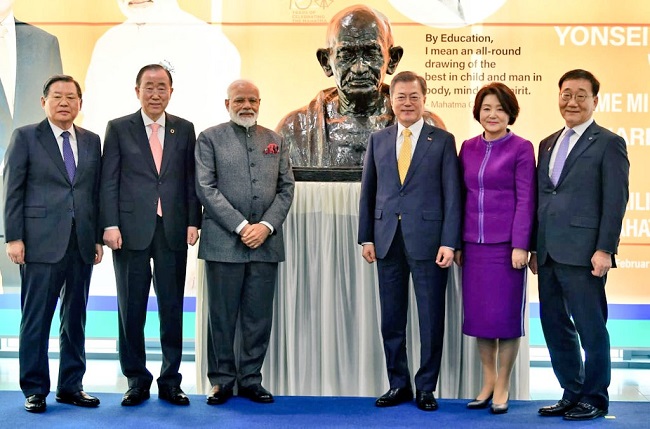 Mahatma also showed to the world that it is "important to leave a clean and green planet" for the future generations.

"The thoughts and ideals of Bapu have the power to help us overcome the menace of terrorism and climate change, two challenges the humanity is faced with these days,"  Modi said.

During his stay in South Korea,  Modi will be conferred upon with the 2018 Seoul Peace Prize at a ceremony to be organised by the Seoul Peace Prize Cultural Foundation on Friday "in recognition of his national and international contributions". 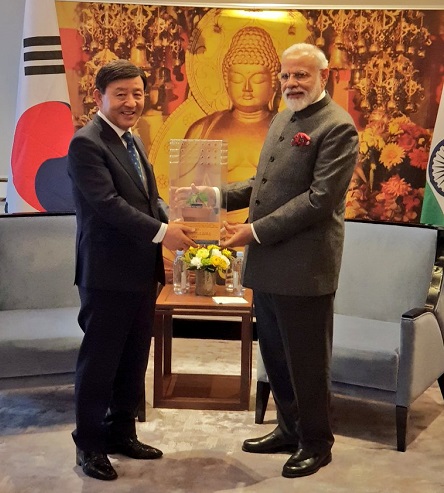 "I want to see more and more Korean businessmen turn their attention to India," he said adding during his stint as Chief Minister of Gujarat also he has always looked at the Korean spirit of entrepreneurship.

Prime Minister also launched the India Korea Start Hub and said this would provide a meeting centre for Indian talent and Korean Start Up ventures.

PM @narendramodi speaking at the unveiling of Mahatma Gandhi bust at Yonsei University : The solution to twin challenges of climate change and terrorism facing the world today, could be found in Mahatma Gandhi's life and his philosophy . pic.twitter.com/b9mGyKk1Vy

Modi also pointed out that his government is laying lot of emphasis on ensuring 'inclusive' growth in the country. (UNI)