Recalling the historical linkages going back to centuries between India and Armenia, the two sides reviewed the bilateral relations between the countries and expressed satisfaction at their steady growth.

Both Prime Ministers highly valued the goodwill existing between the peoples of the two countries which provides a solid basis for their bilateral cooperation, Ministry of External Affairs (MEA) said in a press release.PM Modi also thanked Pashinyan for Armenia's consistent support to India's candidature for the permanent membership of an expanded UN Security Council. "Stressing on the need to considerably enhance the volume of bilateral trade and investment, Prime Minister expressed interest of Indian companies to explore opportunities in IT, agro-processing, pharmaceuticals, tourism and other sectors of Armenia," read the release.

It added that PM Modi sought Armenia's support for concluding an expeditious trading arrangement between India and the Eurasian Economic Union (EaEU) of which Armenia is a member. India and the EaEu are set to start negotiations in this regard soon. 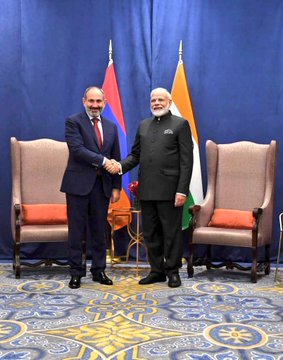 "Prime Minister offered to strengthen India's development partnership with Armenia as per interest and needs of Armenia. A large number of Armenian candidates benefit from training programmes conducted by India under the Indian Technical and Economic Cooperation (ITEC) programme," said the release.

Referring to the popularity of Indian culture, films, music and Yoga, Prime Minister Pashinyan called for greater cultural and humanitarian cooperation between the two countries. He also briefed Modi on the new initiatives of openness of his government and in that context he invited Indian investments in Armenia.