India and US relations soared as Prime Minister Narendra Modi and US President Donald Trump together addressed the Howdy Modi! event at Houston. The two leaders echoed similar sentiments on various issues, including terrorism, trade and defence.

Washington DC: India and US relations soared on Sunday as Prime Minister Narendra Modi and US President Donald Trump together addressed the Howdy Modi! event at Houston. The two leaders echoed similar sentiments on various issues, including terrorism, trade and defence.

Thank you for the affection Houston. Watch my address! #HowdyModi https://t.co/npT6OavmrS

Notably, the friendship between Modi and Trump was on full display at the event. In a never-seen-before display of camaraderie, the two leaders held hands and took a lap around the NRG Stadium after the two leaders addressed the 'Howdy, Modi!' event.

Prime Minister also took the occasion to vouch for Trump ahead of 2020 presidential elections. Modi, in his style, vouched for Trump ahead of 2020 presidential polls, saying "ab ki baar Trump sarkar" - modifying the 'Ab ki Baar Modi sarkar' slogan coined for the 2014BJP election campaign. It is also worth mentioning that during his address, President Trump, after a long time, did not use his official podium, instead, he was using one that had India and USA flags. This illustrated the importance that the US President accords to India and welcoming gesture towards the contributions of the Indian Diaspora in the United States.

The President's warm and greeting gesture of coming all the way from Washington and sitting throughout the Prime Minister's speech and then the victory lap of the stadium, hand in hand, with the visiting dignitary, showed his personal commitment to India-USA ties.

Also Read: Impossible to come to Houston and not talk energy!: PM Modi on fruitful meeting with energy sector CEOs 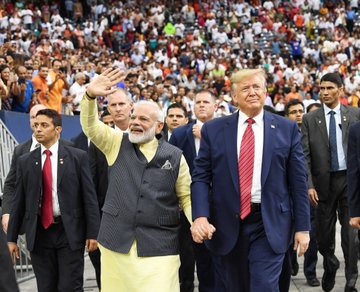 "India and the US are committed to protect innocent civilians from radical Islamic terrorism. To keep our communities safe, we must protect our borders Border security vital to USA," Trump said.

Drawing from Trump's speech Prime Minister Modi also called for a crackdown on terrorism. He without naming Pakistan slammed the nation for nurturing terrorism and sponsoring terror across the globe. 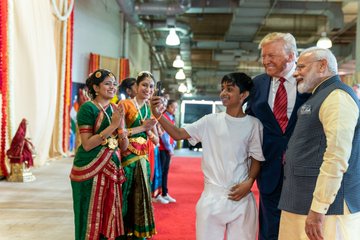 "Be it the 9/11 in the United States or 26/11 in Mumbai, where are the conspirators found? Time has come for a decisive battle against terrorism and those who encourage terrorism," Modi told the gathered crowd at the mega event, which was held at Houston's NRG Stadium.

Interestingly, Trump's blunt remarks earlier about the need to protect innocent civilians from "radical Islamic terrorism" drew a standing ovation from Modi, the Indian delegation, and the Prime Minister invited the gathering to in turn give an ovation to Trump for his fight against terrorism.

Meanwhile, talking on abrogation of Article 370, PM Modi said, "The work done by India is bothering some people who are not able to handle their own country. They do not want peace," said PM Modi, in a veiled attack on Pakistan. 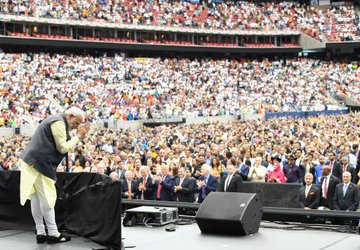 However, against Pakistan's approach of internationalising the issue, Trump did not mention Kashmir in his speech. The close friendship and bonhomie shared between the leaders of the world's two largest democracies have sent a strong message to Pakistan, which is seeking to internationalise India's internal decisions. Pakistan Prime Minister Imran Khan will be attending the 74th session of the United Nations General Assembly with a single-point agenda regarding Kashmir.

The Indian Prime Minister, instead, has completely utilised the arena by attracting investment ventures and creating job security for millions in his country. Petronet's investment of USD 2.5 billion in Tellurian's Louisiana project is what could potentially be one of the largest foreign investments in the US for shipping shale gas abroad.(ANI)