The 12th edition of the summit, which will be the fourth meeting between PM Modi and Shinzo Abe, will be held in Gandhinagar tomorrow.

The two leaders will review the recent progress in the multifaceted co-operation between India and Japan under the framework of their 'Special Strategic and Global Partnership' and will set its future direction. 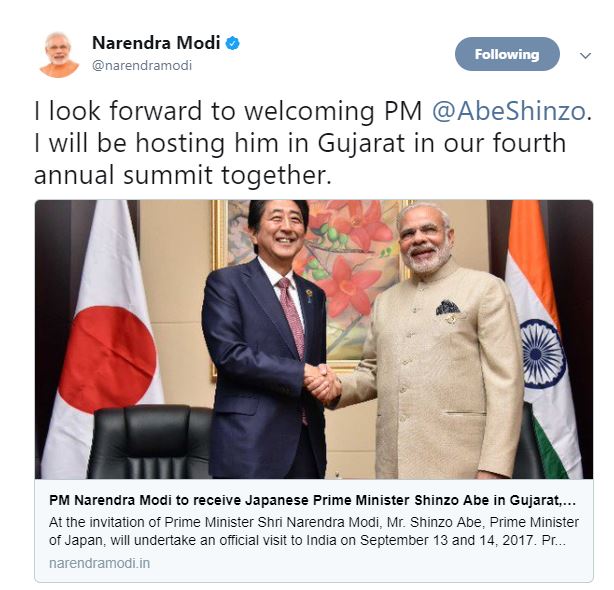 PM Modi and the Japanese PM will also attend a function to mark the commencement of work of India's first high-speed rail project between Ahmedabad and Mumbai.

The train is expected to significantly reduce the travel time between the two cities. Japan is a pioneer in high-speed rail networks, and its Shinkansen bullet train is among the fastest in the world.

An India-Japan Business Plenary will also be held. today, the two Prime Ministers will visit Sabarmati Ashram, which was established by Mahatma Gandhi on the banks of the River Sabarmati.

They will also visit the Sidi Saiyyid Ni Jaali - a famous 16th century mosque in Ahmedabad. Besides, the two leaders will visit Dandi Kutir, the museum dedicated to Mahatma Gandhi, at the Mahatma Mandir.

Ahead of the Japanese Prime Minister's visit, PM Modi on Tuesday said in a tweet that India truly values its ties with Japan and looks forward to further boosting the bilateral relations in a wide range of areas. (ANI)