Political biopics have the potential to stir both bollywood and politics equally by the story and the staller performance of the lead actor who plays the role of the said politician.

Mumbai: Indian film industry has, of late, started to take much inspiration from real life legends and have therefore began to produce films (biopics) based on the life of people who have left an indelible mark on public life. Such movies sometimes give the unsung hero's their dues (like the case of Dashratha Manjhi), and sometimes highlight the achievements of our country (Uri, Mission Mangal). Such movies also give a chance to actors to outdo themselves by giving an exemplary performance to the role they get in the movie. So when late Sushant Singh Rajput played MS Dhoni in his biopic Dhoni, we all felt as if he was really Dhoni's alter ego. No wonder he won accolades from film critics and audiences alike.

One still remembers Paresh Rawal's awe inspiring performance in the biopic of Sardar Vallabhbhai Patel, titled "Sardar". And what better way to enjoy this election season by watching the trailer of Thalaivi, a biopic based on the life of one of the most interesting and dynamic figures of Indian politics, late Chief Minister of Tamil Nadu Puratchi Thalaivi (revolutionary leader) Jairam Jayalalitha. And who better to play this role than National Award winning actress Kangana Ranaut, who is known for her perseverance, passion and performance in whatever role she gets in a movie. 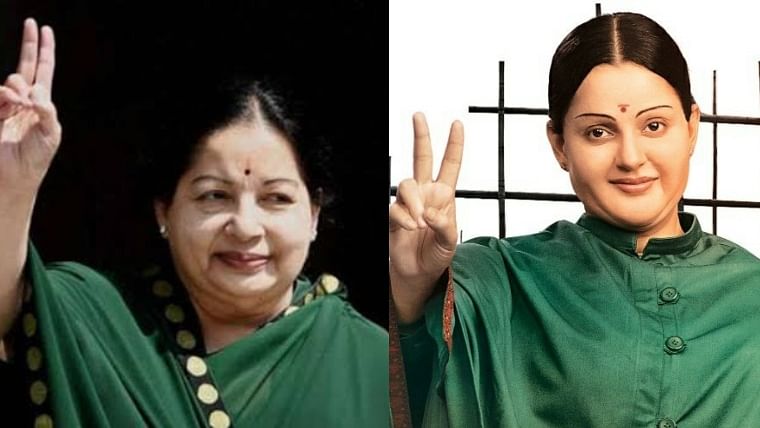 The trailer of the movie itself is power packed with dialogue and performance of Miss Ranaut outdoing any of her past works. It shows the struggle of a beautiful and versatile actress and how she becomes a hero from reel life to real life and the uncountable humongous impediments and hindrances she encounters while reaching to the highest seat of power.

The scene of Miss Ranaut (who plays Jayalalitha in the movie) where her sari is being dragged and she is being humiliated by DMK fold is the most defining aspect of the entire movie trailer. One must also remember that this is not just a fictional incident that has come out of the pen of the script writers of the movie but a real life incident that took place in the life of Late Jayalalitha, that shook her from within and that exposed the true nature of DMK netas who were responsible for it. These days many videos of DMK leaders hitting women and speaking ill about them are doing the rounds in public domain and have become viral, so much that #Anti-WomenDMK became one of the most trending topics on Twitter! And it seems that this mindset of DMK is not new but a continuation of what DMK patriarch late M Karunanidhi practiced and preached to his party men and followers. DMK has a long history of disrespecting women as it considers them 'feeble, weak and submissive'.

A strong woman like Jayalalitha was a nightmare for them and her rise in TN politics was vehemently opposed by the DMK party for very long. However, Jayalalitha stood her ground by fighting against patriarchy at all stages of her life and by working for bringing a positive and decisive change in the lives of original Tamil people. She did not fall into the trap of DMK of Hindu bashing and led a polity that was based on the welfare and development of people of her state.

The struggle of "Nari-Shakti" continues
It is never easy for a woman to carve out her own space in the Indian polity where women are treated not very fairly and are not given her dues. This is especially so in the case of Tamil Nadu where Late Karunanidhi and his supporters spread toxic masculinity through their words and actions. It was fought tooth and nail by Jayalalitha, who as a disciple of MGR entered into public life and soon rose to the ranks of top elites. But the journey was anything but easy and the troubles and problems that she faced can be understood either by reading several books on Dravidian politics or simply by watching the upcoming movie. This movie is also interesting as it tries to somewhat wash the stigma on Bollywood actors that they neglect the issues of the South. Kangana Ranaut deserves unqualified appreciation for taking up this bold role and doing full justice to it. Hope the movie would be as good as the trailer. Till then, wait for the release of the movie and enjoy this election season staying at home, and by maintaining the COVID 19 protocols that are for our own benefits.

Kangana Ranaut opens up on her weight management journey for, after 'Thalaivi' shoot