Indian film critic and trade analyst Taran Adarsh shared the news on his Instagram handle. He wrote, "RAKUL PREET OPPOSITE AYUSHMANN KHURRANA... #RakulPreetSingh and #AyushmannKhurrana will share screen space for the first time in #DoctorG... A campus comedy-drama... Directed by Anubhuti Kashyap... Produced by Junglee Pictures."

The upcoming film will be based in a campus of a medical institute. While Ayushmann will be playing the role of Dr Uday Gupta, Rakul will be seen as Dr Fatima, a medical student who plays Ayushmann's senior in the film.

Speaking about 'Doctor G', Rakul said in a statement, "I am super excited to be a part of Doctor G. There are many first's in this film for me starting with my co-star Ayushmann and I am thankful to Junglee Pictures and the director Anubhuti for bringing us together."

She further said, "I was in love with the script from the time I had heard it. It's a very interesting concept of medical drama and campus comedy that will bring a new perspective to the audience. I cannot wait to start shooting for the film." 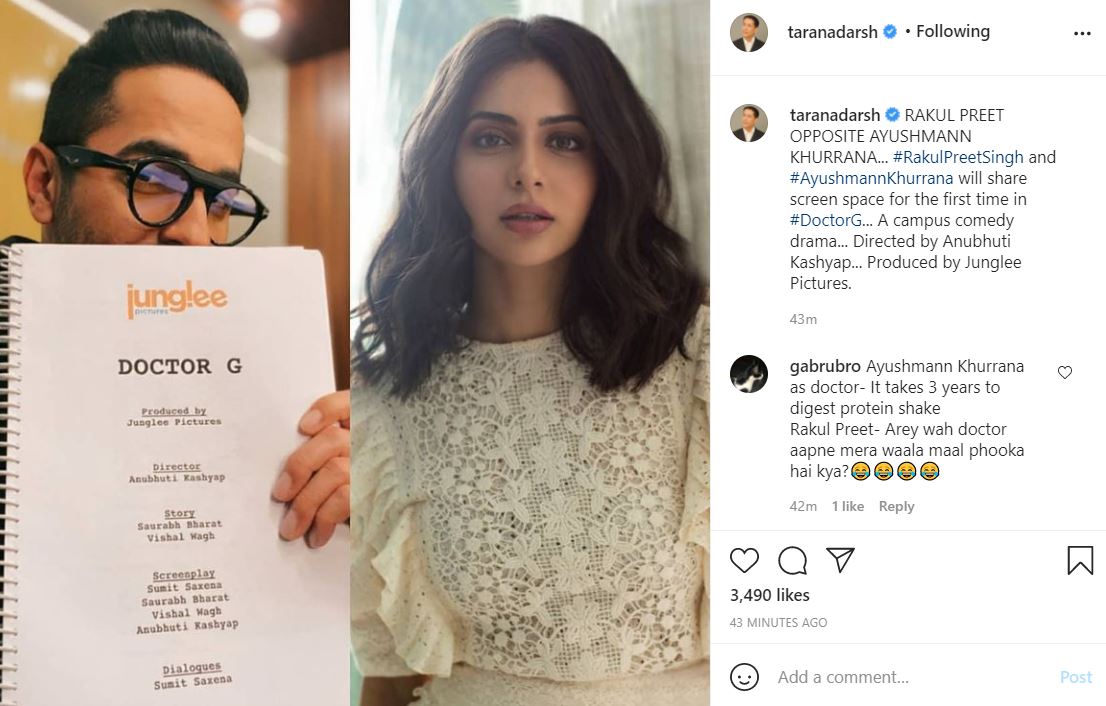 The director of the film, Anubhuti Kashyap, also spoke about the movie and said, "It is always amazing to see two talented individuals coming together. For Doctor G, we wanted a very interesting cast and I am happy we have Ayushmann and Rakul with us. Their on-screen pairing is fresh just like the characters they play in the film and their energies and chemistry will be unique and refreshing for the audience".

Anubhuti will make her debut as a feature film director with the upcoming project. She has in the past directed the dark comedy mini-series 'Afsos' and the critically-acclaimed short film 'Moi Marjaani'.

The film is written by Anubhuti, Sumit Saxena, Vishal Wagh, and Saurabh Bharat and is slated to go on floors soon. In December, Ayushmann had announced the film with a photo of himself posing with the script of the movie. This marks Ayushmann's third collaboration with Jungalee Pictures, after Bareilly Ki Barfi (2017) and Badhaai Ho (2018).

Apart from 'Doctor G', Rakul will also be seen in Ajay Devgn's 'MayDay', co-starring Amitabh Bachchan. Rakul will play the role of a pilot in MayDay, which is slated to release on April 29, 2022. Rakul also has another movie titled 'Thank God', co-starring Ajay Devgn and Sidharth Malhotra, in the pipeline.

Meanwhile, Ayushmann, who was last seen in Shoojit Sircar's 'Gulabo Sitabo', alongside Amitabh Bachchan, is currently shooting for director Abhishek Kapoor's 'Chandigarh Kare Aashiqui' in the titular city. The movie also stars Vaani Kapoor and is expected to release in 2021. (ANI)