The Supreme Court bench consisting of Justices N V Ramana, R Subhash Reddy, and B R Gavai on Thursday heard a plea pertaining to the imposition of information blockade in Jammu and Kashmir.

New Delhi: The Supreme Court bench consisting of Justices N V Ramana, R Subhash Reddy, and B R Gavai on Thursday heard a plea pertaining to the imposition of information blockade in Jammu and Kashmir.

"The Central government cannot put a blanket ban on freedom of speech and expression", senior advocate Meenakshi Arora said in the Supreme Court while referring to the restrictions placed in Jammu and Kashmir after its special status was revoked on August 5.

"There should be reasonable restrictions. People of this country have the right to freedom of speech and expression and nobody can put this into ransom," Arora, representing activists Shoaib Ahmed and Tesheen Poonawala, told the top court.

The counsel further argued that the purpose to impose such conditions on the people "must be legitimate". 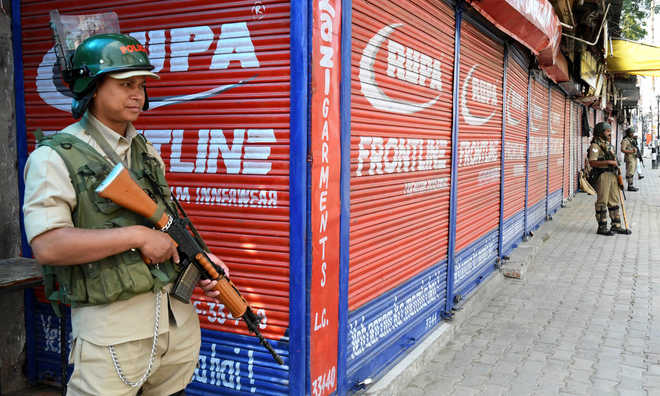 "One has to listen to both sides. In a democratic setup, people of Jammu and Kashmir have all the rights to voice their opinion whatever they want and desire," she added. Opposing her contentions, Solicitor General (SG) Tushar Mehta said that the decision was taken by the government under its constitutional rights to put these bans".

"We are the victims of cross border terrorism. The problem is there since 1947. Please accept the hard reality," Mehta told the apex Court.<br>He said that rights have not been taken away from the people but conferred to them.

"Right to education was applied. The application of many laws will help the vulnerable people in Jammu and Kashmir," Mehta added.In August, the central government had scrapped Article 370 and bifurcate the erstwhile state into two UTs -- Jammu and Kashmir and Ladakh. Following this, phone lines and the internet were blocked in the region.

Normalcy is gradually returning to Jammu and Kashmir as mobile and landline services have been restored in both UTs and restrictions under Section 144 on movement withdrawn or relaxed. (ANI)

Article 370: SC notice to Centre, others; to hear pleas in October

SC to hear plea seeking omission of Article 35 A