Turkey pounded Kurdish militia in northeast Syria for a second day on Thursday, forcing tens of thousands of people to flee and killing at least dozens of people in a cross-border assault on U.S. allies that has turned the Washington establishment against President Donald Trump.


Ankara: Turkey pounded Kurdish militia in northeast Syria for a second day on Thursday, forcing tens of thousands of people to flee and killing at least dozens of people in a cross-border assault on U.S. allies that has turned the Washington establishment against President Donald Trump.

The offensive against the Syrian Democratic Forces (SDF) led by Kurdish YPG militia, which began days after Trump pulled U.S. troops out of the way and following a phone call with Turkish President Tayyip Erdogan, opens one of the biggest new fronts in years in an eight-year-old civil war that has drawn in global powers. 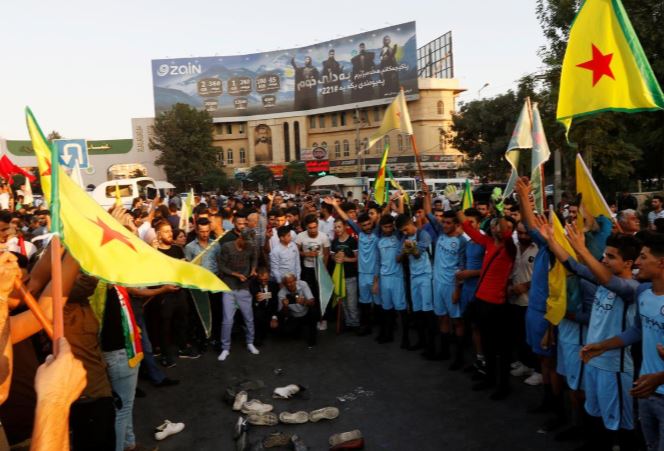 “We have one of three choices: Send in thousands of troops and win Militarily, hit Turkey very hard Financially and with Sanctions, or mediate a deal between Turkey and the Kurds!” Trump said in a Twitter post on Thursday.

“I hope we can mediate,” Trump said when asked about the options by reporters at the White House. Without elaborating, Trump said the United States was “going to possibly do something very, very tough with respect to sanctions and other financial things” against Turkey. The SDF have been the main allies of U.S. forces on the ground in the battle against Islamic State since 2014. They have been holding thousands of captured IS fighters in prisons and tens of thousands of their relatives in detention. SDF forces were still in control of all prisons with Islamic State captives, a senior U.S. State Department official said in a briefing with reporters on Thursday.The United States has received a high-level commitment from Turkey on taking responsibility for Islamic State captives but has not yet had detailed discussions, the official said. 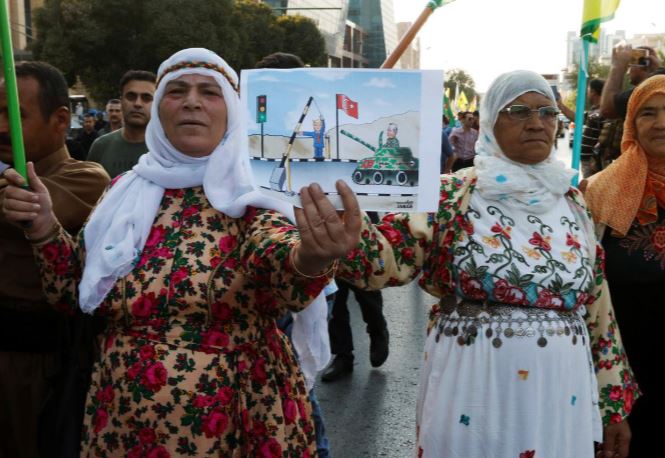 AIR STRIKES
The SDF said Turkish air strikes and shelling had also killed nine civilians. In an apparent retaliation by Kurdish-led forces, six people including a 9-month-old baby were killed by mortar and rocket fire into Turkish border towns, officials in southeastern Turkey said. The International Rescue Committee said 64,000 people in Syria have fled since the campaign began. The towns of Ras al-Ain and Darbasiya, some 60 km (37 miles) to the east, have become largely deserted. The Observatory said Turkish forces had seized two villages near Ras al-Ain and five near the town of Tel Abyad, while a spokesman for Syrian rebel forces said the towns were surrounded after fighters seized the villages around them.

According to a senior Turkish security official, the armed forces struck weapons and ammunition depots, gun and sniper positions, tunnels and military bases. Jets flew operations up to 30 km (18 miles) into Syria - a limit which Turkey’s foreign minister said Turkish forces would not go beyond. A Reuters journalist saw shells exploding just outside Tel Abyad.

Also Read: Iraq to open border-crossing with Syria on Monday

Ankara brands the YPG militia as terrorists because of their ties to militants who have waged an insurgency in Turkey. On Thursday, Turkish police began criminal investigations of several Kurdish lawmakers and detained scores of people in the southeastern city of Diyarbakir, accusing them of criticising the military’s incursion into Syria, state media reported.

Late on Thursday, Turkish Defense Minister Hulusi Akar spoke by phone with his French, British and U.S. counterparts, the defense ministry said. It said Akar and U.S. Defense Secretary Mark Esper discussed defense and security issues, and added that Akar briefed Esper on the aims and progress of the incursion. (Reuters)