TV, AC, washing machines and refrigerators will cost more, while smartphones, small cars and daily use items will turn cheaper when the GST is implemented from July.


New Delhi: Aerated drinks and consumer durables like TV, AC, washing machines and refrigerators will cost more, while smartphones, small cars and daily use items will turn cheaper when the GST is implemented from July. An analysis of the tax rates decided by the all-powerful GST Council for over 1,200 goods and 500 services revealed that daily use items like soap and toothpaste will cost less while fresh fruits, vegetables, pulses, bread and fresh milk will continue to be exempt from any tax.

Also read: Uttar Pradesh Assembly passes GST bill
Economy-class air travel will be slightly cheaper and so will be hiring a taxi as tax on such travel has been brought down to 5 per cent in the Goods and Service Tax (GST) regime from the current service tax of 6 per cent. Foodgrains may also become cheaper as they have been put in zero-rated commodities list. Currently, some states levy purchase tax of 2-5 per cent on foodgrains, which will be abolished under GST. 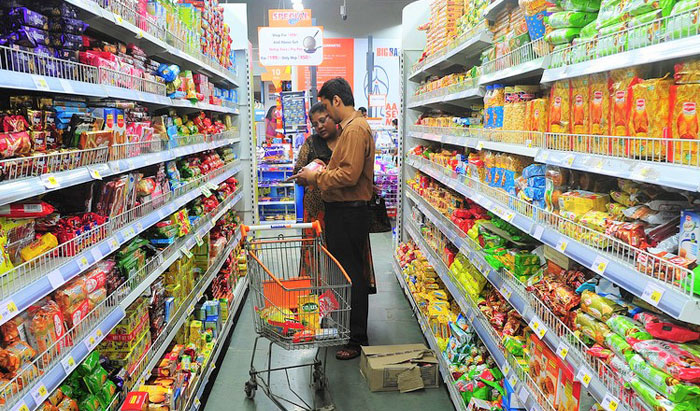 The GST Council had earlier this month put over 1,200 goods and 500 services in four tax slabs of 5, 12, 18, 28 per cent. While the tax incidence on certain commodities like processed food, confectionery items and ice cream would be brought down to 18 per cent from 22 per cent, personal care items like shampoo, perfumes and make-up items would cost more as the tax rate will go up to 28 per cent, from the existing 22 per cent.

Also read: Four bills for GST roll out will be introduced next week
Among the goods, mass consumption items like fresh fruits, vegetables, pulses, bread and milk have been exempt from any taxes, and the same holds true for services like health and education.  Although the real estate sector has been kept out of the GST, under-construction property would be subject to 12 per cent GST rate, as against the present incidence of 15 per cent service tax.

Taxi aggregators will also see marginal reduction in tax rates as the effective rate comes down to 5 per cent from 6 per cent. Motorcycles could also see some reduction in prices as the levy will come down by a percentage point to 28 per cent. While electrically operated 2/3 wheeler vehicles will also see a decline in taxes from 14 per cent to 12 per cent, solar panels could see a steep hike in tax rates to 18 per cent from the present 0-5 per cent. The tax incidence on soaps and toothpaste under the GST regime would also come down to 18 per cent from the existing 25-26 per cent.

Also read: GST Bill to be discussed in Lok Sabha on March 29

Cost of packaged cement is expected to ease as the tax rate will come down to 28 per cent from the existing 31 per cent. Medicines, including ayurvedic drugs, as also medical devices will face a lower incidence at 12 per cent, compared to the existing 13 per cent. 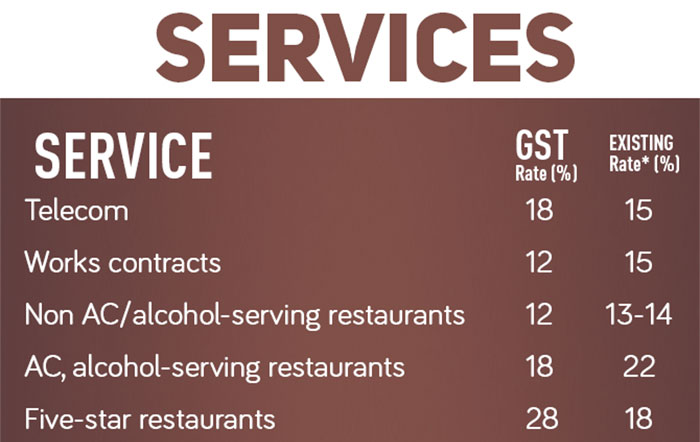 Smartphones should also get cheaper as the current tax incidence on them is more than 13.5 per cent, while the proposed GST rate is 12 per cent. Besides, puja items, including those for havan, bindi and kumkum have been kept in the exempt category.

Taxation on entertainment, cable and DTH services shall also come down as the 'entertainment tax' levied by states has been subsumed in the GST and the effective levy has been kept at 18 per cent. Currently, these services attract an entertainment tax in states in the range of 10-30 per cent over and above the service tax levy of 15 per cent.
Under the GST regime, five-star restaurants will see an increase in tax incidence, while the levy on non-AC restaurants may come down marginally. At present, non-AC restaurants are subject to state VATs in the range of 12.5-20 per cent, while AC restaurants are levied with a 6 per cent service tax on top of state VAT. Under the GST regime, restaurants not having AC and liquor licence will attract 12 per cent levy. On restaurants having AC or liquor licence, the tax would be 18 per cent. Five-star or above restaurants will be taxed at 28 per cent.