Congress leader and Wayanad MP Rahul Gandhi on Friday joined protesters in Sultan Bathery here, who are on a hunger strike opposing the night travel ban on the national highway which cuts through the Bandipur Tiger Reserve in Kerala.

Wayanad: Congress leader and Wayanad MP Rahul Gandhi on Friday joined protesters in Sultan Bathery here, who are on a hunger strike opposing the night travel ban on the national highway which cuts through the Bandipur Tiger Reserve in Kerala.

The indefinite relay hunger strike that began on September 25 is in protest against the daily nine-hour traffic ban on NH 766 that links Kerala and Karnataka.The Wayanad MP met and expressed solidarity with youth leaders who are part of the hunger strike and said that he was confident that a compromise solution could be reached and that there were no political differences between parties on the issue.

"Their (youth) suffering represents the suffering of many people because of this problem. All political parties are united and there are no political differences between the parties on this issue. I am confident that a compromise solution can be reached where the people of Wayanad are benefitted," he said.

He stressed that the matter should be resolved in an "intelligent" and "productive" way. "...There must be no unfairness as far as Wayanad is concerned. Fairness is extremely important. I have spoken to our legal experts and have asked them to help us...We are going to ensure that the best legal resources in the country are available in Wayanad for this issue," Gandhi said.

The Congress scion expressed confidence in a sensitive outcome in connection with the night traffic ban.

"We are going to intelligently and sensitively attempt to resolve this issue...I am confident that we can resolve the matter and the court will have a sensitive outcome," he said. Gandhi said that Kerala Chief Minister Pinarayi Vijayan had promised to resolve the issue at the earliest. 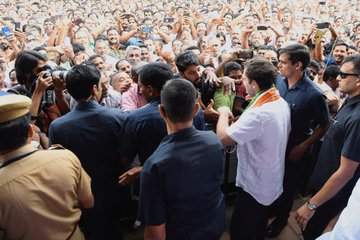 "I have raised this issue in Parliament. I mentioned it to the government. The Chief Minister has committed to me that the government is going to act in the interests of Wayanad and resolve the problem as soon as possible," he further said.

The Wayanad parliamentarian has tweeted his support to the youth's protest.

"I am in Wayanad, Kerala to stand in solidarity with the youth who have been on hunger strike, protesting against the travel ban on National Highway 766. Earlier I visited those who have had to be hospitalised, as a result of the prolonged fast," Gandhi wrote on his Twitter handle.

The Supreme Court has ordered to maintain status quo in the NH 766 night traffic ban and asked a report on the possibilities of complete closure after upgrading the alternative Kutta Gonikuppa Road. 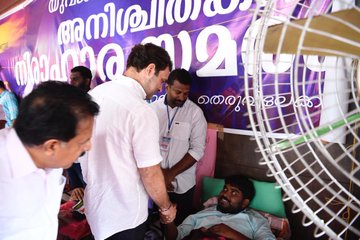 The NH 766 which passes the Bandipur Tiger Reserve was closed 10 years back by the Karnataka High Court in the wake of a number of wild animals who were mowed down by vehicles.The protesters have alleged that if a complete ban is imposed, it will affect lakhs of farmers both in Wayanad and Gundlupet in Karnataka. Vijayan, who was recently on a three-day visit to Delhi, had earlier suggested building an elevated bridge through the forest stretch. The proposal was, however, not approved by the union environment ministry.

On Tuesday, Gandhi had met Vijayan in Delhi to discuss the issue. The Congress leader also wrote a letter to the Kerala Chief Minister stating, "The indefinite hunger strike by youth across political lines against the night traffic ban on NH 766 does point out to us the terrible human cost of this measure."

Meanwhile, a protest by farmers is going on at Gundlupet demanding the lifting of night traffic ban on NH 766. Karnataka Chief Minister BS Yediyurappa had earlier said that the restriction will continue. (ANI)